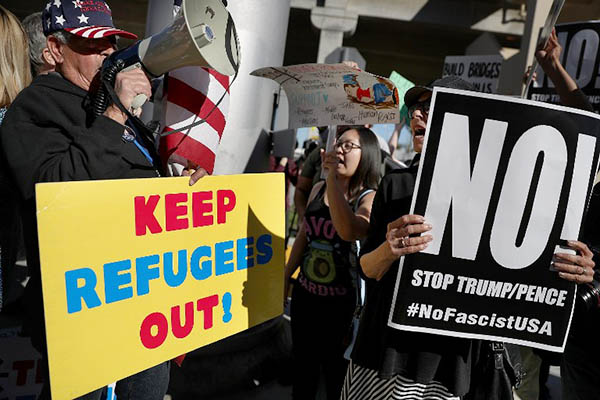 “Victory!!!!!!” the American Civil Liberties Union (ACLU), whose lawyers sued the government, tweeted after U.S. District Judge Ann Donnelly issued her decision. “Our courts today worked as they should as bulwarks against government abuse or unconstitutional policies and orders.”

Trump’s sweeping executive order, signed on Friday, suspends the arrival of refugees for at least 120 days and bars visas for travelers from seven Muslim majority countries for the next three months. The move, which was implemented immediately by U.S. authorities, sparked large protests at major airports across the country. At New York’s John F. Kennedy International Airport, some of the 2,000 demonstrators chanted “Let them in, let them in!”

Donnelly’s decision to issue a temporary stay—which stopped short of ruling on the constitutionality of Trump’s order—concerns dozens of people who were detained at U.S. airports following Trump’s actions. The exact number of those affected is unclear, but the judge ordered the government to provide lists of all those detained at U.S. airports since the measure went into effect.

Sending those travelers back to their home countries following Trump’s order exposes them to “substantial and irreparable injury,” wrote Donnelly, who was appointed by Trump’s Democratic predecessor Barack Obama.

Trump’s pronouncement on Muslim immigration makes good on one of his most controversial campaign promises to subject travelers from Islamic countries to “extreme vetting,” which he declared would make America safe from “radical Islamic terrorists.”

Donnelly’s decision shows that “when President Trump enacts laws or executive orders that are unconstitutional, and illegal, the courts are there to defend everyone’s rights,” ACLU executive director Anthony Romero said in leaving the emergency hearing. But the battle is far from over, and another hearing was set for next month.

“At minimum, they will not be returned to danger,” said ACLU lawyer Lee Gelernt. “The key tonight was making sure nobody was put back on a plane.”