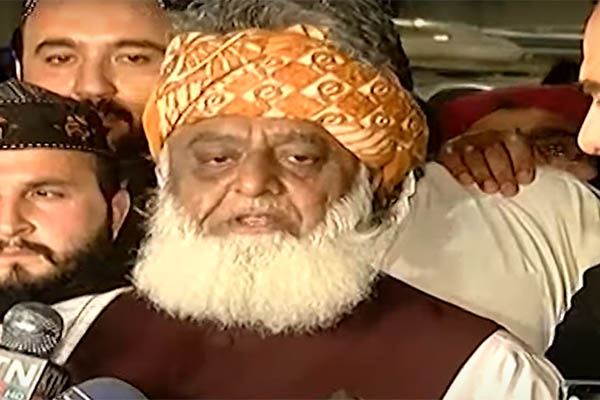 Jamiat Ulema-e-Islam (Fazl) chief Maulana Fazlur Rehman, who also serves as the president of the opposition’s Pakistan Democratic Movement (PDM), on Friday cancelled plans to block roads across the country after Islamabad police released parliamentarians and workers who had been arrested during a raid at Parliament Lodges the previous night.

In an audio statement, Fazl said there was no longer any “need” to block roads as all parliamentarians and workers had been released. He clarified that he was cancelling the protest because the road blockages would cause hardships for commuters, but warned that if the government backtracked from its commitment, he could once again call on his supporters to block roads and highways nationwide.

Condemning the police’s response on Thursday, the JUIF chief claimed they had “discarded all laws and ethics at Parliament Lodges, baselessly tortured workers and dragged and arrested elected representatives of the public, detained their guests and presented a wrong picture and false narrative to the public.” He thanked the party workers, members of other opposition parties, and the people of Pakistan for “taking immediate action and jamming the entire country in less than an hour.”

Interior Minister Sheikh Rashid Ahmed, in a late night press conference, accused the opposition of trying to instigate violence and utilize a “private militia” to pressure the government. However, by both police accounts and eyewitness videos, it is clear none of the people arrested were armed in any capacity. The government’s response also differs from its response to armed members of the then-banned Tehreek-e-Labaik Pakistan, activists of which killed several policemen during their protests last year and were granted an-as-yet-undisclosed deal to end their protests without fear of legal action.

Meanwhile, Special Assistant to the P.M. on Political Communication Shahbaz Gill, in a posting on Twitter, claimed the JUIF had been “making calls all night and asking for forgiveness and for his workers to be released so he could have some honor left.” He also claimed that the detained workers had apologized prior to these release. “In principle, they [workers] should not have been released but we did not want to let them flee the political arena on this excuse,” he added.

On Thursday evening, a heavy deployment of police raided the Parliament Lodges in a bid to oust members of the Ansarul Islam—a volunteer arm of the JUIF that provided security at its rallies—who opposition lawmakers say were invited them to provide security.

Per footage aired on local media, JUIF lawmaker Maulana Salahuddin Ayyubi had reached the Parliament Lodges on Thursday evening with several motorcycle-riding volunteers. While most of the group remained outside the building, some of the volunteers entered the lodges with the lawmaker and were duly registered with security.

According to police, authorities directed them to remove the volunteers after seeing the footage of them on media. The cops were then deployed in large numbers, including an anti-riot unit, police commandoes, the Counter Terrorism Department and Anti-Terrorism Force. Police claim all the volunteers then moved to MNA Ayyubi’s Lodge and locked the door.

Per police, they were asked to surrender voluntarily but they refused.

After a few hours of negotiation, police broke down the door of the MNA’s apartment around 8 p.m., provoking a physical confrontation between cops, legislators and the Ansarul Islam volunteers. The police subsequently launched a “search” operation and attempted to enter the residences of other lawmakers. Several MNAs, including senior PMLN leader Khawaja Saad Rafique, and the volunteers sustained injuries in the subsequent clashes. Some opposition lawmakers have alleged to local media that they have reports that some of the “police” were members of the PTI’s volunteer Tiger Force—a similar grouping to the Ansarul Islam. This could not be independent verified.

Police eventually arrested around two dozen volunteers, and at least four legislators—a senator and three MNAs—who were then bundled into police vehicles. While the police was attempting to leave, a visibly outraged Fazl reached the scene with a large number of his party workers and activists. Saying he would personally submit himself for arrest, he called on all his supporters nationwide to block roads to protest the government action.

Incensed JUIF supporters then blocked roads and highways across the country, suspending traffic overnight. Following an overnight joint meeting of the opposition, Fazl directed party workers to reopen all the blocked highways and set a deadline of 9 a.m. for the government to release arrested parliamentarians and party workers or face further protest.

JUIF Senator Kamran Murtaza, who was injured during the clashes, has filed a complaint against the police operation inside the Parliament Lodges. The application alleges that police injured MNAs, adding that they did not have arrest warrants or the permission of the National Assembly speaker to enter the lodge.

However, the interior minister on Friday morning claimed police had all relevant warrants and had actually been directed to oust the volunteers at the urging of Speaker Asad Qaiser.

Government Delays to Blame for Scale of Floods...