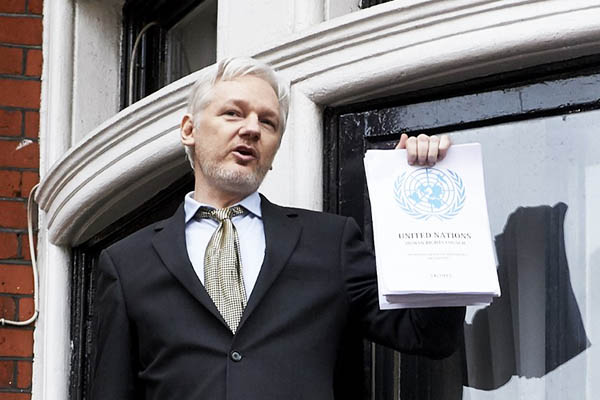 A timeline of the WikiLeaks founder’s five-year legal saga.

A U.N. panel has claimed that WikiLeaks founder Julian Assange has been “arbitrarily detained,” and should be able to claim compensation from Britain and Sweden over his time spent in an Ecuadorian embassy. Here are key dates in his five-year legal saga:

Some 500,000 classified military documents concerning American diplomacy and the wars in Afghanistan and Iraq had already been released by Wikileaks in July and October, 2010, respectively.

Assange turns himself in to police in London and is placed in custody pending a ruling on the Swedish extradition request. He is later released on bail and calls the Swedish rape allegations a smear campaign. Under the bail conditions, he must live at a supporter’s mansion in England.

A British judge rules that Assange can be extradited to Sweden. In November Britain’s High Court rejects an appeal against his extradition. Assange fears Sweden will hand him over to U.S. authorities who could prosecute him for publishing the documents and possibly sentence him to death.

Assange requests political asylum at the Ecuadorian embassy in London. He is allowed to stay there by the government in Quito.

Ecuador demands that Britain allows Assange to fly to Quito.

A Swedish court upholds the European arrest warrant against Assange.

Assange’s lawyer says he will not leave the embassy until it is guaranteed he will avoid extradition to the United States.

Assange loses an appeal against the arrest warrant.

Assange files a complaint against Sweden and Britain with the U.N. Working Group on Arbitrary Detention.

WikiLeaks says the cost of policing Assange is £10 million, the equivalent of 39,000 hospital beds. Police say they spend 11,000 euros a day on surveillance.

Swedish prosecutors offer to question Assange in London. He initially accepts, but Quito demands later that an Ecuadorian prosecutor do the questioning.

Assange says he will turn himself over to British police if the U.N. Working Group on Arbitrary Detention rules that he has not been arbitrarily detained.

The U.N. panel confirms its view that Assange has been “arbitrarily detained,” saying he should be able to claim compensation from Britain and Sweden over his time in the embassy. Britain immediately rejects the ruling, saying it will challenge it.