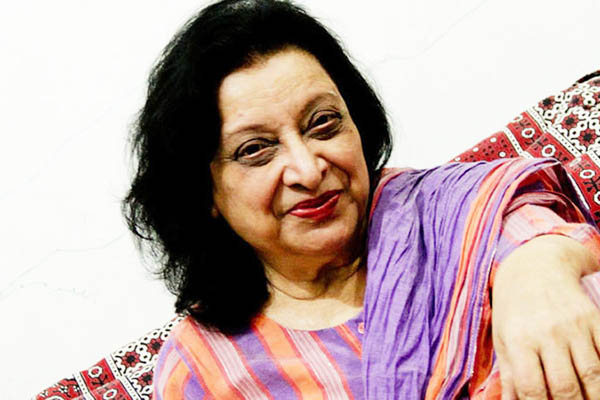 Urdu poet Fahmida Riaz, who died in Lahore on Nov. 21, leaves behind a daunting legacy

Fahmida Riaz, Pakistan’s greatest “living” Urdu poet, died on Nov. 21, 2018, in Lahore at the age of 72. Writing rebellious feminist verse in a male-dominated ideological state kept her under a cloud of disapproval; but the greatness of her poetic genius brought spontaneous applause from those who cared for great poetry. Born on July 28, 1946, in a literary family of Meerut, UP, India, she settled in Hyderabad following her father’s transfer to Sindh. She grew up in an Urdu and Sindhi milieu, later becoming adept in Persian and Hindi as well.

She was toughened by circumstance, her father dying when she was only four, and writing verse, her mother, Husna Begum, supporting the family. Fahmida started news-casting for Radio Pakistan while still in college and soon published her first collection of poetry. Pressured into an arranged marriage after graduation, she spent a few years in the U.K. with her first husband—hence her British nationality—working at the BBC Radio Urdu service and got a degree in filmmaking, and gave birth to a daughter.

Back home after the end of her marriage, Fahmida went into advertising while launching her own Urdu publication Awaz, meeting and marrying Zafar Ali Ujan, a leftist political worker. This “meeting of the minds” produced two more children. Awaz soon drew the attention of the despotic Zia regime and the couple was charged with sedition. Her “objectionable” collection Badan Dareeda had come out in 1973. Awaz was subsequently shut down and Zafar was consigned to jail. She avoided going to jail by fleeing to India with her children in 1981. Actually she stayed on in India after attending a mushaira to avoid the generals’ wrath—only to be called an Indian spy by the Muslim League government in Islamabad.

She was made poet-in-residence at Jamia Millia Islamia University in New Delhi. It was then that she wrote her great lines: “Tum tau bulkul hum jaisay niklay” (You turned out to be just like us! / Where were you hiding all this time, buddy? / That stupidity, that ignorance / We wallowed in for a century / Look, it arrived at your shores too!). The poem was translated by the great Indian writer-journalist, Khushwant Singh.

She was prophetic. In July 2018, Indian Congress Party politician Shashi Tharoor said India will become a Hindu Pakistan if the BJP wins elections in 2019. The BJP was deeply offended because in India Pakistan is no model to follow. It wanted Congress party president Rahul Gandhi to apologize for the remark by his partymen. Alarmed, Congress distanced itself from Tharoor. But similarities can’t be ignored. If Fahmida thought she had walked into a secular paradise she was mistaken and wrote the now-famous poem to express her disenchantment. India and Pakistan are not worth listening to when they talk about each other and she probably couldn’t take even a normal secular Indian telling her what to think about the country she had fled.

She was in India for seven years. She had relatives in Meerut she could catch up on; and her husband later joined her there after his release from jail. She returned only after the Zia interregnum was over in Pakistan and reached Karachi on the eve of Benazir Bhutto’s wedding reception, getting appointed as the managing director of the National Book Foundation, to be later persecuted by the first Nawaz Sharif government as, once again, an Indian agent. After Bhutto’s return to power she was given a niche in the Quaid-e-Azam Academy, but returning to her status of persona non grata after Bhutto’s fall. She joined as managing director of the Urdu Dictionary Board in Karachi, a position she served in from 2000 to 2011.

Fahmida also translated 50 of Rumi’s poems from Persian into Urdu, dedicated to Shams Tabriz. It was then that she received another blow: her son drowned while swimming with friends in 2007.

Below are but two of Fahmida Riaz’s many, many poems that prove the talent and wit we have lost with her passing:

Condolence Resolution on her own death by Fahmida Riaz (July 1946 -Nov 21, 2018)
Translated by Patricia L. Sharpe

When I am dead, my friends, spare me the pain
Do not give me a testimonial of faith.
Do not declare, in passionate orations,
‘This woman was indeed a true believer.’
Do not seek to prove me loyal, my friends,
To the state, the nation
And the powers-that-be.
Do not beg the lords of the land
To claim me at my death.

The taunts of the mean were laurels to me;
The wind and the dust were my soul mates.
The deepest truth lies far within the soul
And those who shared it were my friends.
Mounting a pulpit was not their way,
But they stood tall for me and held my hand.
You must not show them disrespect
Or try to ingratiate me with the judges.
Never say, ‘Her corpse seeks forgiveness.’

Don’t be distressed if I am left unburied
If the priest denies me the final rites.
Carry the remains to the woods and leave it there.
It comforts me to think that the beasts would feast
At my bones, my flesh, this strong red heart,
They would feel no need to screen my thoughts.

Their bellies filled, they’ll clean their paws
And their sinless eyes will gleam with a truth
That you, my friends, dare never express:
‘She always said what she had to say,
And for all her life had no regrets.’

Turned out you were just like us.
So it turned out you were just like us!
Where were you hiding all this time, buddy?
That stupidity, that ignorance
we wallowed in for a century –
look, it arrived at your shores too!
Many congratulations to you!
Raising the flag of religion,
I guess now you’ll be setting up Hindu Raj?
You too will commence to muddle everything up
You, too, will ravage your beautiful garden.

You, too, will sit and ponder –
I can tell preparations are afoot –
who is [truly] Hindu, who is not.
I guess you’ll be passing fatwas soon!
Here, too, it will become hard to survive.
Here, too, you will sweat and bleed.
You’ll barely make do joylessly.
You will gasp for air like us.
I used to wonder with such deep sorrow.
And now, I laugh at the idea:
it turned out you were just like us!
We weren’t two nations after all!
To hell with education and learning.
Let’s sing the praises of ignorance.
Don’t look at the potholes in your path:
bring back instead the times of yore!

Practice harder till you master
the skill of always walking backwards.
Let not a single thought of the present
break your focus upon the past!

Then, dear friends, you will arrive
and get to heaven after all.
Yep. We’ve been there for a while now.
Once you are there,
once you’re in the same hell-hole,
keep in touch and tell us how it goes!

Women writers, journalists, lawyers, intellectuals and public speakers are the greatest assets of Pakistani cultures which has been enriched by the resistance of these noble and outstanding women against religious bigotry, double standards of the ruling classes, failed Islamic Socialism, military dictatorship, broken democracy and shameful political existence of the elites in Pakistan.
Fahmida Riaz taught us to be truthful to ourselves and all her life was an example of this noble merit.

Fahmida’s poetry remains a cultural manifesto of resistance in which she says ‘ paradise must be a desirable wish for some humans, but first prepare yourself to extinguish the fire of hell’.

Fahmida Riaz always shows in her poetry, prose, novels and moreover in her cultural imaginations a unique experience of ethical consistency against the shadows of evils who harassed, imprisoned and exiled intellectuals from the land of Pakistan. She lamented on hopelessness, the injury of loneliness and told her readers:

‘Do not give up on your desires of loves, peace, freedom and sorrows…The ethics of a truth stand taller than the singing of national anthem ….’.

Fahmida Riaz helps us to understand the idea of justice through speaking truth to power.

This is not easy but it has its noble rewards because once your pen has been taken away, do not despair, find another way to locate and search another pen to prepare the remains of the day. As she advises, ‘with the story of another song of resistance’.

“Tum tau bulkul hum jaisay niklay”. This timely taunt could have only come from a true lover of India. Her poetry and prose will continue to inspire generations to come to keep the flame of justice and democracty alive.