Home Lightbox ‘Justice Must Be Done’

‘Justice Must Be Done’ 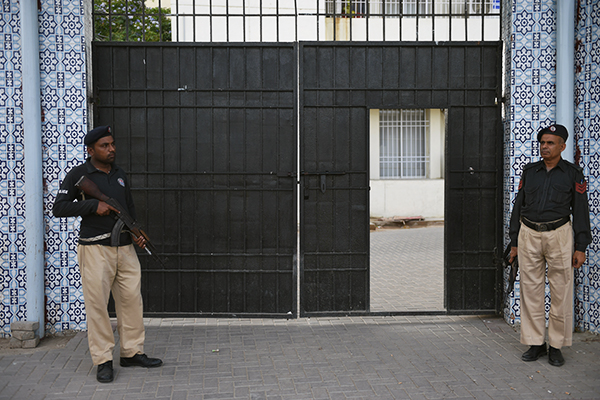 No one’s faultless for the sorry situation in Sindh.

Aftab Ahmed died in the early hours of May 3, within 48 hours of being picked up by the Rangers (Sindh) as part of their ongoing operations in Karachi against terrorism and “economic terrorism.” The paramilitary force says the 42-year-old father of five died from cardiac arrest. Ahmed’s party, the Muttahida Qaumi Movement, which has borne the brunt of the Rangers’ actions in Karachi, says he died from torture—hospital and Edhi Foundation sources have told the press that Ahmed’s body bore signs of torture. An autopsy has been ordered, as has an internal inquiry by the Rangers into the matter.

Reacting to criticism on social media and cable news channels, the military’s Inter Services Public Relations department issued a brief statement on May 4. The Chief of Army Staff “has directed to hold an inquiry to find out [the] truth in the case of Aftab Ahmed, who died in Karachi yesterday. He instructed to ensure that justice must be done.” The Rangers also issued a press release, which said that, “The services of Rangers’ officials allegedly involved in Aftab [Ahmed]’s death have been suspended until further inquiry.”

The MQM says Ahmed’s death was an “extrajudicial killing.” It wants an impartial judicial investigation, not an internal Rangers inquiry, into the matter. “The government and policymakers should bring an end to such activities where people are being picked up without any evidence against them,” said Dr. Farooq Sattar, senior MQM leader and member of Pakistan’s National Assembly, adding that Ahmed is not the first such casualty.

“It will not suffice for the Rangers to investigate themselves,” said Amnesty International on Wednesday. “A series of contradictory statements by the paramilitary force in the hours since the news of Ahmed’s death emerged point to attempts to mislead the public and resist accountability. The chilling revelation that Ahmed was tortured and died in the Rangers’ custody must result in an independent, efficient and transparent investigation. This is not an isolated incident: we have received numerous reports of a broader pattern of arbitrary detentions, other ill- treatment, torture and unlawful killings in Karachi and other parts of Sindh.”

Also on May 3, despite being burnt by the Rangers itself and at the usual behest of Pakistan’s Interior Ministry, the Pakistan Peoples Party’s government in Sindh allowed the Rangers another 77 days—until July 19—to continue with their ‘Save Karachi’ operation, which commenced on Nov. 10, 2013, and has markedly improved the law and order situation there. The extensions will keep coming since the operation is popular and the PPP really has no choice in the matter. But the Rangers’ popularity and the PPP’s powerlessness are no excuse, at all and for anyone, for the sorts of apparent excesses being committed in order to ‘save’ Karachi.

The authority of the Rangers in Karachi is incommensurate with the mandate given to them, and their influence extends to all government institutions and state-owned companies (the Rangers have raided several of them) there. This power flows from their popularity and the public disenchantment with both the PPP and the MQM. The Rangers believe in their mission and their methods. In March, they asked the Supreme Court to grant them even greater powers which would have instituted a parallel law and order system in the province. The court turned down this request. From a public-relations perspective alone, this attempted overreach was ill advised.

Equally damaging were leaks attributed to the Rangers that the PPP’s targeted-by-Rangers Dr. Asim Hussain, under arrest since Aug. 26, siphoned “Rs. 2 billion” daily from Pakistan State Oil while federal minister for petroleum and natural resources. (This translates into Dr. Hussain making off with an impossible $7.12 billion or about 57 percent of PSO’s total sales revenue in financial year 2012-2013 alone!) The National Accountability Bureau’s Sindh wing claims Dr. Hussain caused a loss of “Rs. 479 billion” and counting to the national exchequer. These are allegations on steroids, and establish both the capital inadequacy of investigating agencies and the zeal with which they pursue their by-any-means objectives.

The man leading the Rangers (Sindh), Maj. Gen. Bilal Akbar, is widely viewed as able, clean, and God-fearing, while the PPP and MQM are seen as far from saintly and selfless. The internal inquiry that has been ordered into Ahmed’s death is the very least that the Army chief was required to do—if only to retain the public buy-in for the operation. But the MQM is right to fault the PPP for relinquishing its responsibilities and failing to play its part in normalizing Karachi. At fault, too, are the media and the people, who delight in the misfortunes of both parties and who shrug off the lives which may have been unjustly lost and roiled as collateral damage in the service of ‘justice.’