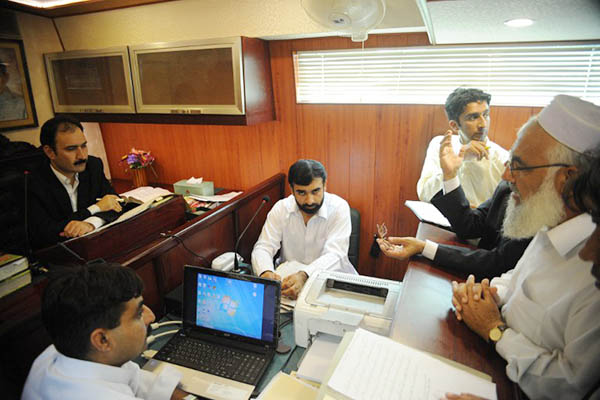 Khyber-Pakhtunkhwa’s courtroom-on-wheels is cutting down the backlog of cases in the face of multiple challenges.

Sweat pours down Judge Fazal Wadood’s back as he sits perched behind a desk inside a custom-built green bus that is the latest weapon in the battle against Taliban influence in Pakistan.

The $98,000 vehicle, whose striped awnings make it more reminiscent of a giant fast food van than an arm of the state, allows Judge Wadood to preside over Pakistan’s first mobile court.

Boasting a portrait of Pakistan’s founding father Muhammad Ali Jinnah—and an air conditioner that struggles to fend off the intense summer heat—the bus is designed to go directly to the people, resolving their daily disputes in some of the most remote and dangerous parts of the country.

The aim is to cut down the backlog of cases in ordinary courts dating back years—a situation that has bred frustration, fuelled support for the Taliban and increased calls for Islamic shariah law at the expense of the government.

It is part of a $15 million project—25 percent bankrolled by the government in the northwest and the rest by international donors—to strengthen the judicial system and state institutions.

Musarat Shah, a 72-year-old widower locked in a five-year land dispute, is one of the first on board the bus, which has the white crescent and star of the Pakistani flag emblazoned on its side. “Justice delayed is justice denied,” says Shah, furious with the slow pace of the regular court system. “Multiple commissions were held. One commission finished and demanded another commission, and it was taking us nowhere.”

Wadood summons a group of mediators, who agree to go off and inspect her land, then sets another hearing for a week’s time.

Shah, exhausted and slightly baffled, appeared to reserve judgment on whether the new court would actually help.

The bus has been set up by the high court in Khyber-Pakhtunkhwa province, where a six-year Taliban insurgency is concentrated, and the U.N. Development Program.

“Strengthening the judicial system and the legitimacy of state institutions is one of the main ways to counter the influence of non-state actors,” said Marc-Andre Franche, the head of UNDP in Pakistan.

Eight judges and 18 lawyers have been trained in conflict resolution to find quick solutions in simple cases that risk dragging on for years, clogging up the creaking judicial system.

On one day—with the bus stationary in a car park in the Hayatabad suburb of Peshawar—Wadood together with a registrar and stenographer tapping away on a laptop, handled nearly 30 cases. “Our work is speedy mediation between two parties in property conflict, family problems and other problems we face in daily life,” says Mohammed Osman Khan, chairman of the arbitration council.

But the mobile court faces major challenges if it is to succeed and authorities are to decide whether it is worth rolling out further courtroom buses.

One is the jirga system, traditional gatherings of tribal elders who typically mediate similar disputes at a local level. Human rights organizations criticize their decisions as arbitrary, which as one example notes can include women being given away in marriage.

Hayat Ali Shah, director of the judicial academy in Peshawar, believes the two systems can operate side by side. “A civil litigation in KPK (Khyber-Pakhtunkhwa) comes to the court only when jirga and all efforts have failed. So hopefully there will be no competition,” he said.

He is also hopeful that the bus initiative can take off. “If you plant a beautiful tree in your lawn and it produces very fine fruits, so everybody living in the neighborhood … will request a branch to plant in his lawn. So if this bus gives good results, I hope we will have many other buses,” says Shah.

But it remains unclear how many villagers will opt for the mobile bus rather than the traditional jirga system, and if so how quickly.

The other major complication is security. So far, the mobile court has limited its work to the suburbs of Peshawar. Even there, an armed police escort is necessary. Taliban-led insurgents carry out near daily gun and bomb attacks in the northwest that have killed thousands in recent years.

The authorities are trying to agree on extra security precautions for when the bus travels to more dangerous parts of the northwest, away from the heavily protected city of Peshawar. But Wadood, for one, is not afraid of death.

“The law and order situation in our country is the worst now but … there are also problems of security in the (normal) judicial complex, so we don’t fear to work here or there,” he said.

Will the tribal elders accept decisions made on a bus? Interfering with local and tribal laws can result in more problems for the very people that the mobile court is trying to help.

There is such a huge backlog of pending cases in the courts of law that the people will take a sigh of relief if they get justice at their doorsteps.

@faraz
The State just cannot leave locals on the mercy of tribal laws that were once concocted by their old forefathers. True, interference is bound to create problems. But one must not forget that the essence of any law is to provide JUSTICE; as long as the purpose is served, no problem can arise which cannot be effectively dealt with.

P.S.: putting mobile court as “decisions made on a bus” really does not help the cause which, as according to you, is “to help”.