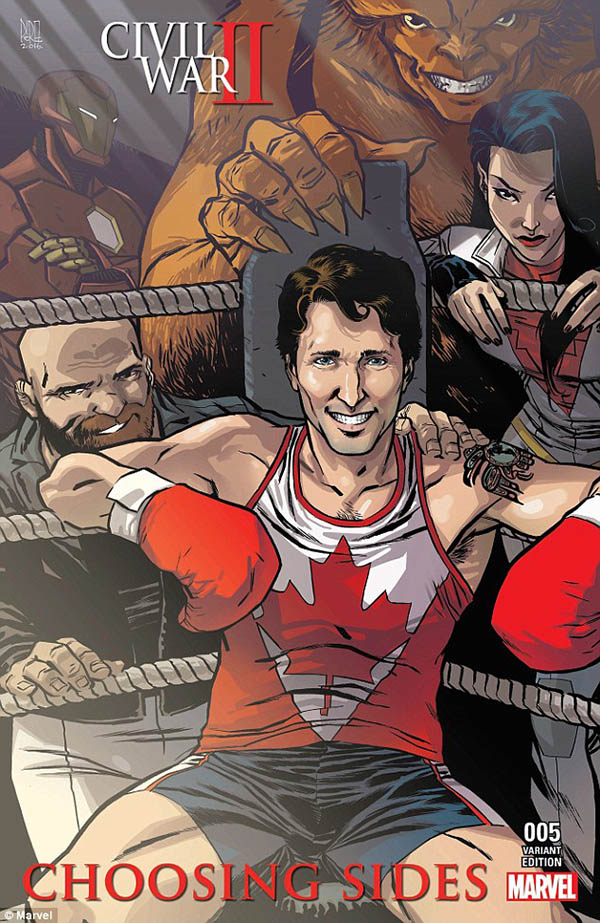 He snowboards, he hikes, he surfs—Canadian Prime Minister Justin Trudeau is already a bit of an action hero. But now, Marvel has made him into a real comic hero, in a book that hit newsstands on Wednesday.

Trudeau graces one of two covers of the latest edition of Civil War II: Choosing Sides—seated in the corner of a boxing ring, smiling, his elbows resting on the ropes, with the maple leaf symbol emblazoned on his tank top and wearing red boxing gloves. The 44-year-old prime minister is surrounded by Canadian superheroes Puck, Sasquatch and Aurora—members of the Alpha Flight squad—as Iron Man looms in the background.

The main cover in circulation does not feature Trudeau.

The comic book also features a mysterious new character, Ulysses, who has the power to predict the future.

Trudeau is consulted in his Ottawa office by the members of Alpha Flight after a disagreement breaks out over how to leverage Ulysses’s powers. Captain Marvel wants to take measures to prevent crimes before they occur, while Tony Stark views it as immoral to punish anyone for a crime they have not yet committed.

Trudeau takes a principled view, telling his comrades: “Above all else civil liberties must be protected. I think imprisoning people for crimes they may not even have thought of yet is wrong… I think this is a dangerous path you’ve embarked on.”