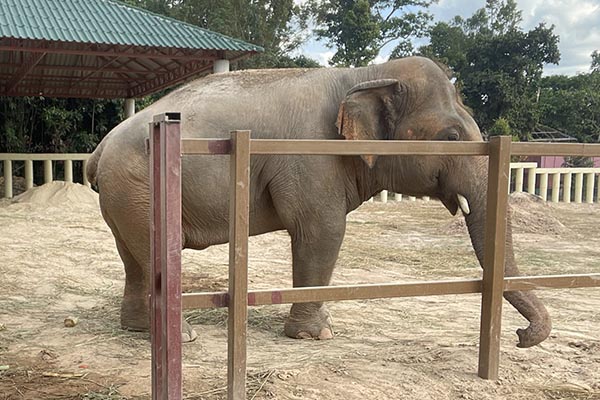 In the two weeks since he was airlifted to Cambodia, Pakistan’s Kaavan has fully adapted to his new environment, and has even befriended three female elephants, according to a report published by China’s Xinhua News Agency.

Citing Cambodian Environment Ministry Secretary of State Neth Pheaktra, the state-run press agency said that under the care and protection of the Cambodia Wildlife Sanctuary, Kaavan is enjoying a second lease on life. “Kaavan is healthy and has adapted himself very well with the atmosphere of his new home, and he starts to get on with other female elephants around him,” Pheaktra told media during a visit to the sanctuary.

“From now on, Kaavan, previously known as the world’s loneliest elephant, is no longer lonely because in the Kulen Prum Tep Wildlife Sanctuary we have arranged three female elephants to live with him,” he said, adding that he hopes Kaavan “will help produce many Asian baby-elephants for Cambodia.”

The 35-year-old Asian bull elephant reached Cambodia’s Siem Reap province from Pakistan via chartered plane on Nov. 30 after spending nearly 35 years in an Islamabad zoo where he was often chained up and showed signs of “zoochosis”—a type of mental illness brought on by solitary confinement and dilapidated living conditions. His exit from Pakistan involved a court ruling, as well as the intervention of international celebrity Cher, who personally saw him off from Pakistan.

Shortly after his arrival, he was transported to the Kulen Prum Tep Wildlife Sanctuary, whose President Sok Hong said Kaavan had begun to enjoy his new life and would hopefully be released into the wild in the next few months. “I think it will take three months to take care of Kaavan before releasing him into the wild because now he has started to accustom himself to nature here,” he said.

Asian elephants are designated as endangered on the International Union for Conservation of Nature Red List. Pheaktra told Xinhua that Cambodia is home to hundreds of Asian elephants, mostly living in the Cardamom Mountains and in the northern provinces of Mondulkiri and Ratanakiri. “According to our reports, the number of Asian elephants is between 400 and 600,” he said, adding that Cambodia needs about $40.5 million dollars in the next 10 years to ensure the conservation of the species.

Since Kaavan’s exit from Islamabad, the zoo that served as his prison has been shut down on court orders, with the government announcing it would develop a Wildlife Conservation Center at the location. Earlier this week, two Himalayan bears, Suzie and Babloo, were sent to a sanctuary in Jordan after Climate Change Ministry officials were unable to convince the Islamabad High Court that Pakistan had the necessary facilities to care for them.