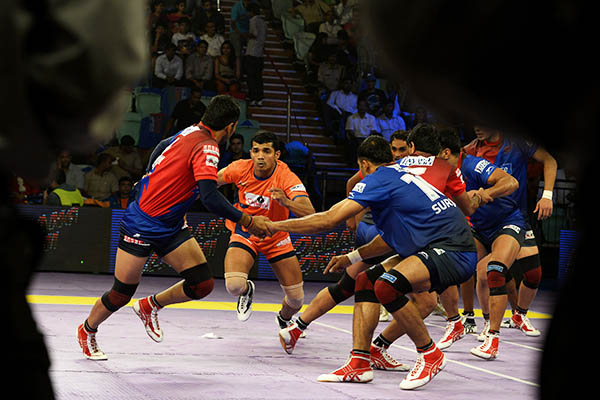 India’s Pro Kabaddi League is revitalizing the sport for a new generation.

Despite years as one of the India’s top players of kabaddi, Ajay Thakur was not well known in his homeland. Until now.

Since the high profile launch last month of a new Pro Kabaddi League, with live television coverage, corporate sponsors and brightly colored lycra strips, the 27-year-old has become an overnight sensation. The new league has given a new lease of life to kabaddi, a traditional contact sport that mixes tag and wrestling.

“It feels great when kids ask me for an autograph,” said Thakur after a recent game with the Bengaluru Bulls, one of eight teams in the new league. “It is all new to me, and makes me hungry for more of all this.”

Although the sums involved represent only a fraction of the funding that cricket attracts in India, they are transforming the game’s once dowdy image and the lives of its players. “I never thought sponsors would put money on kabaddi,” said Thakur, who is in the 80kg weight class and is now able to afford the food that he needs to perform at his best.

Kabaddi features two seven-member teams facing off on a tennis court-sized pitch. A “raider” from each team has to dash into the rival half and touch players from the opposing team without being tackled before escaping back to safety on their side of the court. Players traditionally chant “kabaddi” repeatedly to prove they are not breaking the rules by drawing breath during that time.

But that is the low-tech version of the game. At the Thyagraj Indoor Stadium in New Delhi the screaming fans are treated to booming music, pyrotechnics and plumes of smoke, while colored spotlights focus on the players’ tight lycra outfits. There are no shouts of “kabaddi”—instead an overhead screen provides a 30-second countdown, turning the sport into a slick show for audiences in the stadium and at home.

Team owners include a media mogul, a top industrialist and a popular Bollywood star, much like the Indian Premier League, cricket’s cash-rich Twenty20 tournament.

However Charu Sharma, the veteran commentator who came up with the new league, says the comparison only goes so far. “We do not have that kind of money. But the IPL did make us realize that sport works well if you package it better,” he said.

The top kabaddi player was sold for about $20,000. By comparison, Delhi Daredevils paid a whopping $1.4 million for England star Kevin Pietersen in the 2014 IPL.

Sharma got the idea after seeing how popular kabaddi was at the 2006 Doha Asian Games. “The world hasn’t yet woken up to the charms of this game,” he said, adding that it would be a shame for India, the homeland of the sport, to ignore such a cultural gem. “If we don’t give due respect to it and don’t take pride in our achievements, it’s a shame.”

The game is played in around 35 countries including Pakistan, South Korea and Bangladesh, but India has won all seven gold medals at the Asian Games since it was introduced in 1990.

Confirmed viewing figures for the league are not yet available, but local media say 22 million people tuned in to watch the first day of the season last month.

Radha Kapoor, entrepreneur and owner of the Delhi franchise, said it was time India saw the potential of its indigenous games. “I am sure a lot of people have doubts, but that is where the opportunity lies,” she said. “See what the U.S. has done with baseball and American football.”

Later this month a World Kabaddi League will launch, targeting the large Indian diaspora, with a first leg in London followed by stops in the U.S. and Canada among others. “It is like a kids’ game being played by grown-ups,” said 17-year-old American Francis Britschgi, a recent convert. “It has all the elements that make for a great spectator sport.”