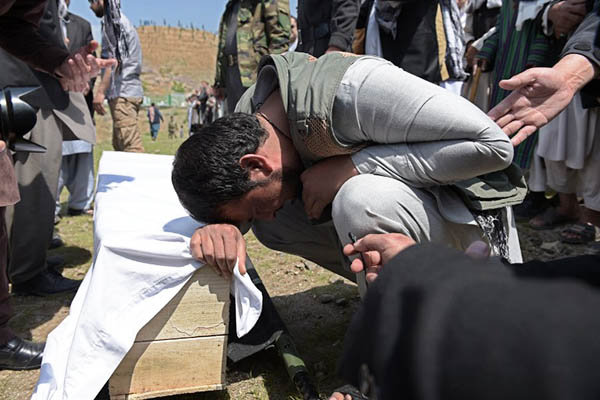 The death toll from a Taliban attack in Kabul has more than doubled to 64, officials said Wednesday, in what appeared to be the deadliest assault on the Afghan capital since the Islamists were toppled from power in 2001.

The brazen attack on Tuesday on a security services office in the heart of Kabul is seen as the opening salvo in this year’s Taliban spring offensive, launched last week.

A powerful Taliban truck bomb tore through central Kabul and a fierce firefight broke out, sending clouds of smoke billowing into the sky and rattling windows several kilometres away.

“It is with regret that I announce that 64 people were killed and 347 others wounded in yesterday’s Kabul attack,” interior ministry spokesman Sediq Sediqqi told reporters. “Most of them are civilians.”

The ministry had earlier put the death toll at 30.

The Taliban claimed three “martyrdom seekers” carried out an attack on the National Directorate of Security, the main spy agency. One of them, it said, managed to slip away alive. Afghan authorities insisted the building, used by NDS in the past, only housed an elite security agency charged with protecting top government officials.

“The victims of [the] terrorist attack are all fathers, brothers or children of people,” Afghan President Ashraf Ghani said on Twitter. “We will avenge every drop of Afghan blood.”

Mourners in Kabul held emotionally charged funerals on Wednesday for the dead, many of whom local media said were employees of the targeted security agency. “The government is unable to stop these attacks on the people,” said Abdul Basir Mobasher, a relative of a security official killed in the attack. “The people will be forced to rise up in revolt if these attacks don’t stop.”

The attack underscores concerns raised in a new United Nations report, that reported a spike in civilian casualties during the first three months of 2016 due to growing attacks in urban centers. “The Taliban exposed the hollowness of their recent vow to ‘safeguard and protect the lives… of civilians’, by launching a massive suicide attack in central Kabul,” Human Rights Watch said in a statement. “Those responsible for deliberately carrying out such an attack committed a war crime.”

The Taliban last week announced the start of their spring offensive, even as the government tries to bring them back to the negotiating table to end the drawn-out conflict. The insurgents warned they would employ “large-scale attacks” across Afghanistan during the offensive—dubbed Operation Omari in honor of the movement’s late founder Mullah Omar, whose death was announced last year.

Another large-scale assault occurred in 2011, when dozens of worshippers were killed in a suicide attack in Kabul during the Shia holy day of Ashura.

The Afghan government at the time said 80 people died in the attack. But the U.N., which is well known for their meticulous civilian casualty figures, subsequently reported a toll of 56. In 2008 a car bomb at the Indian embassy in Kabul killed 60 people.

The Taliban’s resurgence has raised serious questions about the ability of Afghan forces to hold their own and prompted calls for the U.S. to reconsider its troop withdrawal schedule. There are currently 9,800 American troops in the country, set to fall to 5,500 by 2017.

Peace talks, which began last summer, were abruptly halted after it was revealed that Mullah Omar had been dead for two years, a disclosure which sparked infighting within insurgent ranks.

A four-country group comprising Afghanistan, the United States, China and Pakistan has been holding meetings since January aimed at jump-starting negotiations, though their efforts have so far been in vain.