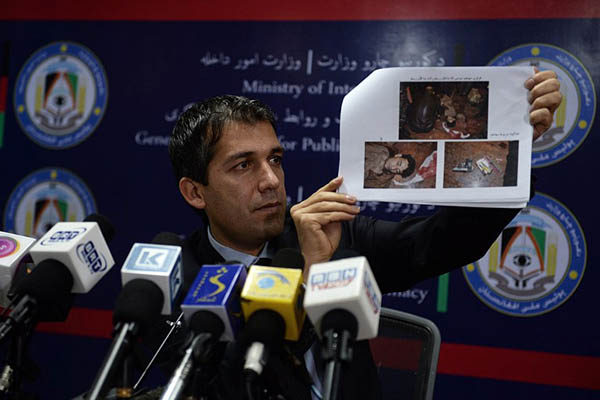 Afghanistan on Sunday said an attack on a Kabul hotel that left nine civilians dead, including an AFP journalist, was planned “outside the country” in a veiled reference to Pakistan.

The National Security Council (NSC), which is chaired by President Hamid Karzai, also alleged that a Pakistani diplomat was seen scoping out the corridors of the Serena hotel ahead of the Thursday night raid.

Pakistan was the main supporter of the former Taliban regime in Afghanistan, and Afghan officials have long voiced suspicions about connections between the hardline movement and Islamabad’s powerful intelligence services.

The NSC said the attack on the hotel, which was carried out by four teenage gunmen and claimed by the Taliban, was in fact the work of “foreign intelligence services”—a phrase normally meant to mean neighboring Pakistan. “Witness testimony and preliminary information analysis shows that this terrorist attack was directly executed or carried out by foreign intelligence services outside the country,” the council said in a statement.

“Another information of the NDS (National Directorate of Security) shows that earlier when one Pakistani diplomat entered the Kabul-Serena hotel to use its sport club, he filmed the corridors of the hotel which the hotel staff raised objections to,” it added.

The NDS is Afghanistan’s main intelligence agency. The victims of Thursday’s attack included AFP journalist Sardar Ahmad, his wife and two of their three children, along with another Afghan and four foreigners—two Canadians, an American and a Paraguayan.

Afghanistan made a similar allegation following a deadly restaurant bombing in Kabul in January that killed 21 people including 13 foreigners. The latest accusation could damage relations with Pakistan, which is battling its own homegrown Taliban insurgency and is seen as crucial to encouraging the Afghan Taliban to open talks.

Afgn accused US in the previous attack.