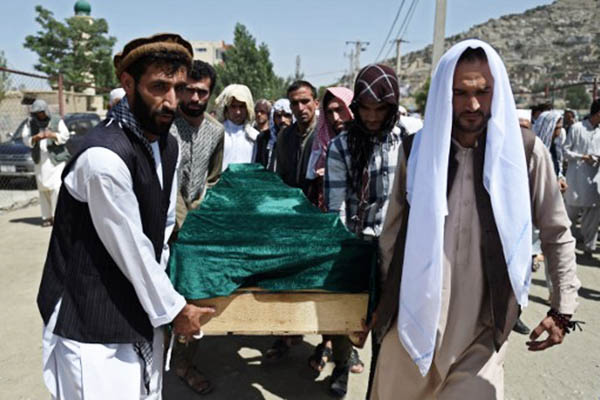 Mohinddin, who loved football and was passionate about joining the Afghan police force, was to return home after his graduation as a cadet to celebrate Eid-ul-Fitr with his family. But the reunion instead took place at a cemetery in Kabul on Friday, where his tearful father and brother watched under a brilliant early afternoon sun as the 18-year-old was buried.

Mohinddin was one of 32 young cadets mown down by the Taliban one day before, killed in a suicide attack on the edge of the Afghan capital hours after their graduation. Two suicide bombers—one on foot, the other aboard a car packed with explosives—detonated against their convoy in an attack, which also wounded 79 people, according to the latest official toll on Friday.

The young man’s body was brought to his uncle’s home, opposite Kabul’s Qul Ab Chakan cemetery, whose tombstones line the foot of a hill like scales. A procession of blue burqas rushes behind the light curtain that hides the entrance to the house, from which comes the sound of weeping and chanting women.

The news of Mohinddin came at midday. “His friends warned us. We tried to call him, but his phone was off,” said family friend Abdul Hakim Hamadi, standing at the edge of the grave.

The boy’s father and older brother embarked on a desperate quest around hospitals, the police, the army, and emergency NGOs. They searched all night. “He was not on the lists whenever they sent us them back,” Hamadi recounts.

Finally, at 7:00 a.m. on Friday—the final Friday in the holy month of Ramzan before Eid-ul-Fitr, one of Islam’s most important holidays—they saw his body, lying among those of his comrades at a military hospital. The body was intact, but Mohinddin’s face was burned.

Behind their grief, his parents are angry, said Hamadi. “They did not want him to join the police. They tried to dissuade him but he had this ideal, to defend his country,” he said.

The graduation ceremony took place Thursday morning at the Wardak Police Academy east of Kabul. Shortly after, the cadets embarked on their week off to celebrate the end of Ramzan.

With all of Hesarak, the family’s home village in the Panjshir Valley, expected at the cemetery the funeral was delayed until afternoon to give mourners time to make the three-hour drive to Kabul. Some 300 men escort the green-draped coffin—the faces of the elderly etched with oppression, young ones wiping their cheeks.

When Mohinddin’s face appears they remove the coffin at the burial, his father and his brother let slip their tears. Veiled silhouettes watch the ceremony from behind a thin curtain overhanging a window in the uncle’s house.

Among them, without doubt, are Mohinddin’s mother and two sisters, barred by their gender from laying him to rest.

Across the city, a man named Agha Jan was also searching Friday, seeking news of his brother Jalal-ad-Din. The 27-year-old had a small drink kiosk in Kabul, but joined the police to “make more money” and support his family—a wife and two children, one aged three and the other just six months old. “Me, I told him, do not go: when you are a graduate they will send you to a dangerous province, somewhere in Helmand [the south] or Badakshan [the northeast],” where the Taliban are waging pitched battles with government forces, Jan said. “But he was willing to take that risk, because he needed the money.”

With the police, his brother would have earned up to 10,000 Afghanis in one of those exposed positions. But the U.N. says more than 5,000 police and military lost their lives last year.

Since Thursday’s attack, Agha Jan has toured hospitals, cell phone in hand, his green eyes red from a sleepless night and feeling the worst. The name of Jalal-ad-Din still does not appear on the lists.