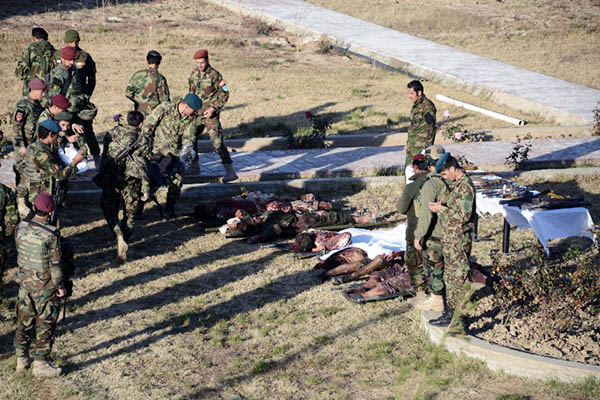 The death toll from a 27-hour Taliban siege of Kandahar airport has jumped to 50, Afghan officials said Thursday, after a conference in Pakistan shored up international support for reviving peace talks.

Eleven suicide attackers on Tuesday breached the high-security complex, which also houses a joint NATO-Afghan base, taking families hostage and triggering firefights with soldiers. The raid, which saw militants blowing themselves up among civilians before Afghan troops secured the area, is seen as the most serious attack in 14 years of war on the complex, the largest military installation in the south of the country.

“Fifty of our innocent countrymen, including 10 soldiers, two policemen and 38 civilians, were martyred in the attack,” the defense ministry said in a statement. It added that 37 people, including 17 army men and four police, were wounded.

“A group of 11 terrorists attacked a bazaar and a school in the airport complex, took up positions in the area and blew themselves among civilians.” The Taliban posted a picture on their website of the militants it said were involved in the attack. It shows 10 young men sporting trimmed beards, Kalashnikovs and identical military uniforms. The face of one of them is obscured with blue ink for unknown reasons.

The raid coincided with Afghan President Ghani’s high-profile visit to Islamabad on Wednesday for the Heart of Asia conference aimed at promoting regional ties. Ghani and Prime Minister Nawaz Sharif vowed their commitment to the peace process, with the United States and China also offering support.

Ghani’s willingness to visit Islamabad has signaled a renewed push to mend badly frayed cross-border ties, which could help jumpstart peace talks with the insurgents.

Pakistan, which is believed to wield considerable influence over the Taliban, hosted a milestone first round of peace negotiations in July. But the talks stalled when the Taliban belatedly confirmed the death of longtime leader Mullah Omar, sparking a power struggle within the movement that lead to a rival faction splitting off last month.

The Kandahar raid came after days of fevered speculation about the fate of new Taliban leader Mullah Akhtar Mansour following reports he was critically wounded in a firefight with his own commanders. The Taliban released an audio message Saturday purportedly from Mansour, vehemently rejecting reports of any shootout as “enemy propaganda.”