Karachi at Standstill After Shia Massacre 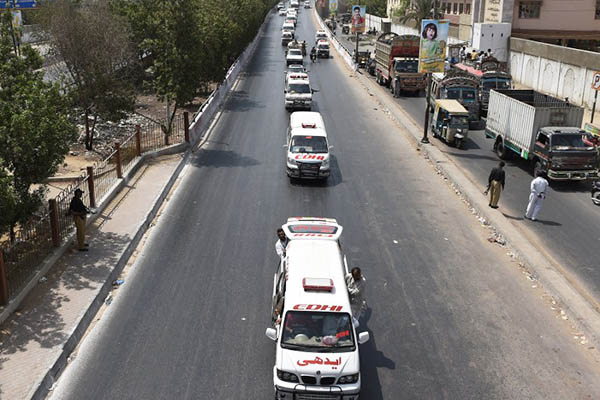 Police say attackers were likely local, despite claims of responsibility by Islamic State and Jundallah.

Karachi was at a standstill on Thursday, as residents dealt with the massacre of 44 minority Shia Ismaili Muslims in the first attack officially claimed by the Islamic State group in the country.

Hundreds of distraught relatives lined the streets around a cemetery in the city’s eastern Safoora Goth area passing the coffins of the men and women who were killed on Wednesday when up to six gunmen stormed a bus and shot them in the head and upper body. The provincial chief minister had announced a day of mourning as all markets, shops and schools were shut and public transport was suspended. Schools, colleges and universities also postponed examinations.

The toll from the attack rose from 43 to 44 after a wounded woman died at the city’s Aga Khan hospital, a spokesman told AFP.

Karachi police chief Ghulam Qadir Thebo said the police had rounded up several suspects and most of them were the members of banned militant outfits. Thebo said: “According to initial investigations, there were six attackers. Three went inside the bus and three remained outside. They fired with 9mm and Kalashnikov rifles.”

Wednesday’s attack was the first in the country officially claimed by the Islamic State group, which controls swathes of territory in Iraq and Syria. It was also claimed by local militant faction Jundullah, which reportedly pledged its allegiance to the group last year.

Thebo, the police chief, was cautious about the claims and said the attackers seemed to be locals. “The attacker seemed to be local and knew the area well. Maybe their handlers were from outside Pakistan,” he said. “In a previous attack on Bohri community mosque the attackers also left a pamphlet, investigators are looking into whether it is the same group which struck yesterday,” he added, referring to another Shia minority sect.

Wednesday’s attack was the second deadliest in Pakistan this year after 62 Shia Muslims were killed in a suicide bombing in late January.