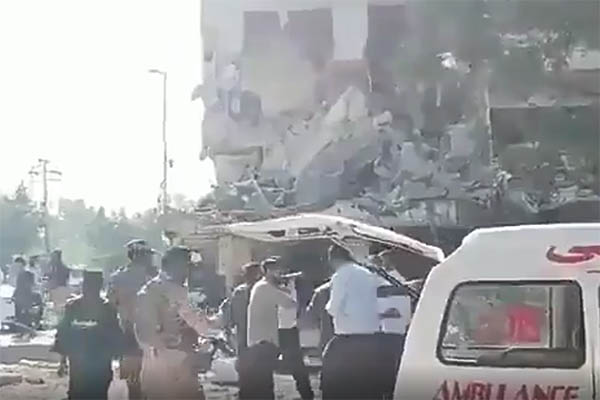 At least five people killed, 20 others injured in blast believed to have originated on multi-story building’s second floor

An explosion at a four-story building in Karachi’s Gulshan-e-Iqbal area on Wednesday left at least five people dead and 20 others injured, with Chief Minister Murad Ali Shah directing the Karachi commissioner to submit a detailed report on the incident.

Officials of the non-governmental Edhi Foundation said all the injured and deceased had been shifted to the nearby Patel Hospital. They said that four women and two children were among the deceased, and clarified that all the building’s residents had been evacuated to safety.

Footage from the site showed the building had been left gutted, with large columns suspended in midair, raising fears of the building’s structural integrity and the potential losses if it were to collapse on one of its neighboring structures. Karachi Commissioner Iftikhar Ali Shallwani told media that the building would be demolished as the extent of the damages ensures it cannot be repaired. He also said that surrounding buildings would also be surveyed to determine whether the explosion had caused any damages to their structure.

While the nature of the explosion has yet to be determined, police have said that it appears to be a gas explosion because of a strong smell of natural gas in the immediate aftermath of the blast. A preliminary report issued by the bomb disposal squad has claimed that the explosion was caused by a gas leakage, adding that no explosive materials had been found to suggest any kind of terrorist activity.

Sindh Chief Minister Murad Ali Shah has taken notice of the incident and directed the Karachi commissioner to submit a detailed report in this regard. In a statement issued on Twitter, he said that authorities had also been directed to ensure medical treatment for the injured. He also expressed grief over the deaths and injuries reported.

Sindh Inspector General of Police Mushtaq Mahar has also taken notice of the incident and directed officials concerned to submit a report on the details of the explosion and the rescue and investigation steps taken by the police.

Pakistan Peoples Party Chairman Bilawal Bhutto-Zardari expressed grief over the lives lost in the incident, according to a statement issued by the party, which rules over Sindh province. He also sought detailed information on the nature of the blast and the extent of the damages caused by it.

Pakistan Tehreek-e-Insaf lawmaker Ali Zaidi, a resident of Karachi, posted a tweet offering “prayers and sympathies” to the victims. He also called on the authorities to conduct a “thorough investigation of this tragedy.”

Editor’s Note: This story is still developing and will be updated as more information becomes available