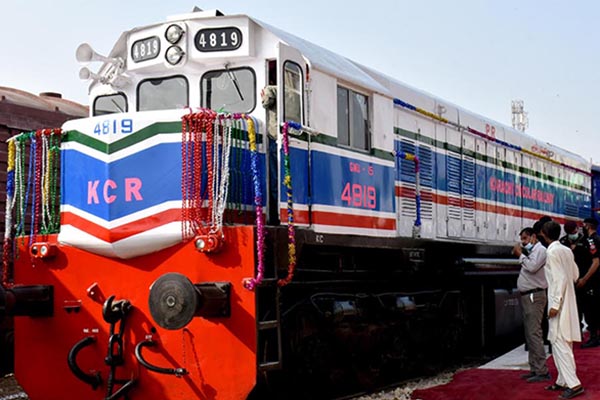 Inaugurating the Karachi Circular Railway on Thursday, Railways Minister Sheikh Rashid Ahmed said all credit for the restoring the local transport service after a gap of 20 years went to the Chief Justice of Pakistan.

“We [PTI] are going to do lots of work in railways and, God willing, we will try to reduce the problems of Karachi. We will completely modernize [KCR] within a year,” he said. The minister said that the total fare for the route had initially been set at Rs. 50, but he was reducing it to Rs. 30 in light of it not being fully operationalized yet.

In the first phase, trains would run along the Karachi City-Orangi-Karachi City route, with Pakistan Railways management promising that operations on the remaining tracks would be launched as soon as possible.

Ahmed blamed the ‘land mafia’ in Karachi for the delay in resuming the full route, saying the Sindh government would work to clear all the encroachments.

“In 25 years, the land mafia has taken over the KCR tracks. We are fully cooperating with the Sindh government; they have started work on sewerage lines, issued tenders for overhanging bridges. Once that is done, we will increase the KCR, and the credit for that goes to the Imran Khan government,” he said.

The minister also hinted that once the KCR was fully operationalized, the government would seek a private company to run its day-to-day operations.

“I issued tenders for new coaches thrice but only one party applied. This is why Pakistan Railways did not spend even a rupee in the last two years and we did the work ourselves,” he said. He said each of the 40 refurbished coaches had cost Rs. 900,000 to upgrade, adding that Rs. 1.8 billion had been earmarked for the project, out of which Rs. 17 million had been spent thus far.

In the first phase—which covers 14km of the 55km route—four trains would run daily from Pipri to City Station. Minister Ahmed said that a monthly travel pass would soon be available for Rs. 750.