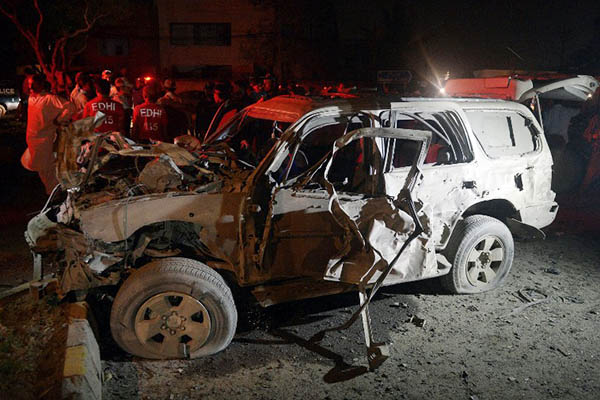 A car bombing in Karachi killed two people and wounded six others, including a police officer who oversaw crackdowns against militants and high profile terrorists, officials said on Thursday.

The convoy of Farooq Awan, a senior officer, who heads the special investigative unit (SIU) in the police force, was attacked. Raja Umer Khatab, chief of the city’s counter-terrorism unit, said that the explosive material was planted in a vehicle.

Ghulam Qadir Thebo, the city police chief, said early investigations suggested an explosives-packed vehicle was used in the attack but added that it was premature to say whether it was a suicide attack. “Awan remained safe, though he sustained some injuries,” Thebo said.

Seemi Jamali, the spokesperson at Karachi’s Jinnah Post Graduate Medical Centre, confirmed that two people died in the attack. She added two women were among the injured.

Since 2001, Awan has been a key player in the police fight against terrorist groups in the city.  He arrested the kidnappers and murderers of U.S. journalist Daniel Pearl in 2002 in Karachi. The police officer also arrested Akram Lahori, a hardened Sunni extremist, who was involved in killings of minority Shias.

Nobody has so far claimed responsibility for the attack but the Pakistani Taliban have claimed several recent attacks on the security forces including the assassination of Karachi police senior official Chaudhry Aslam earlier this year.