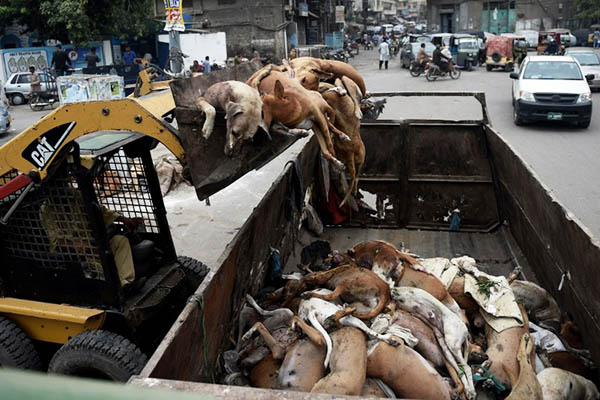 Strays poisoned by municipal workers in Sindh capital due to ‘lack of options’ to rehome them, place them in pounds.

Municipal workers in Karachi have poisoned over 1,000 stray dogs to death after a deluge of complaints about animals biting women and children, an official said on Wednesday.

A total of 1,050 dogs were culled in the campaign. Estimates suggested 2,000 more would be targeted in the next phase.

Rehan Hashmi, the chairman of the municipal jurisdiction, said authorities had been flooded with complaints of stray dogs biting people and suggested the extermination program was necessary because the city lacked the resources to rehome the dogs or put them in pounds.

“Had there been some better resources or options, I would love to switch to that,” Hashmi said, adding: “They are living beings after all.”

Animal rights are largely neglected in Pakistan, but a handful of activists and veterinary surgeons are fighting to find a middle ground between stray dogs and a population that, often for religious reasons, find them unclean. Few families outside the upper classes keep dogs as pets, though some people use them to guard their homes—meaning there is little demand for rescue dogs.

Conservative figures estimate the feral dog population of Karachi could be up to 35,000. The city sees as many as 15,000 reports of dog bites a year, according to Isma Gheewala, head of Karachi’s Animal Care Center.