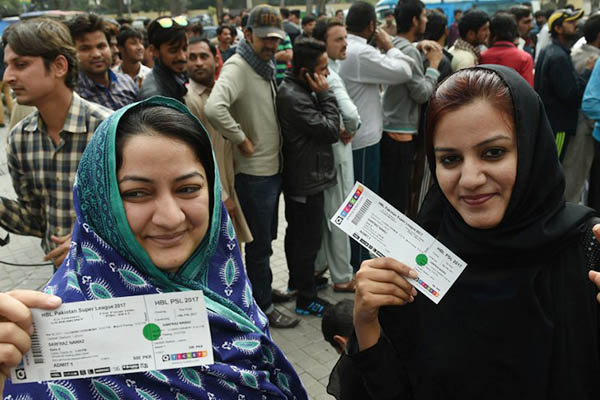 Quetta Gladiators to face off against Karachi Kings or Peshawar Zalmi in Lahore final.

Karachi Kings upset defending Pakistan Super League champions Islamabad by 44 runs in Sharjah on Wednesday as a host of foreign stars refused to travel to violence-plagued Lahore for the final citing safety fears.

Paceman Mohammad Amir (3-7) and spinners Imad Wasim (3-18) and Usama Mir (3-24) sent Islamabad crashing to 82 all out in 15.2 overs as Karachi defended 126, the lowest total in Pakistan Super League history. Opener Asif Ali played a lone hand of 39 as stalwarts like Brad Haddin (nought), Misbah-ul-Haq (13) and Shane Watson (eight) all failed.

Karachi’s batsmen had also struggled after left-arm paceman Rumman Raees returned figures of 4-25 in his four overs. Babar Azam and Shoaib Malik top-scored with 25 each in the play-off clash.

Karachi will now meet Peshawar Zalmi in the last play-off on Friday in Dubai with the winner to take on Quetta Gladiators in Sunday’s final in Lahore.

The Pakistan Cricket Board (PCB) on Monday decided to still stage the final in the city despite last week’s two bomb blasts, which killed 22 people and left over 100 injured.

However, five Quetta players—Kevin Pietersen, Luke Wright, Rilee Rossouw, Tymal Mills and Nathan McCullum—have refused to go to Pakistan over security fears. The PCB insist they will be replaced by some other foreign players.

Lahore has been the scene of violence affecting cricketers before. In 2009, Sri Lanka’s team bus was attacked by gunmen who killed six policemen. Several of the Sri Lanka team and staff were injured and the bloodshed turned Pakistan into a ‘no-go zone’ as far as international teams were involved.

“It’s with a heavy heart I will not be coming to Lahore. I have a young family and for me a game of cricket is just not worth the risk,” tweeted 31-year-old Wright. “I’m sorry as I know how much it means to you all and hopefully in the future the safety will not be in doubt to come play there.”

Rossouw—the highest scoring batsman for the Gladiators—also took to Twitter to confirm he would not be playing in the final. “It’s with a sad heart that I must announce that I will not be taking part in the final,” tweeted the 27-year-old, who has played over 30 one-day internationals for South Africa.