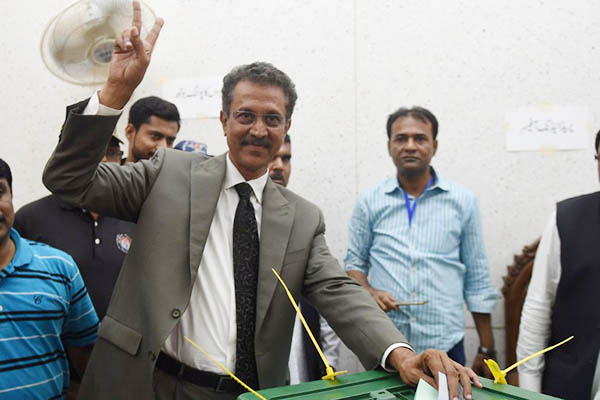 The MQM leader is currently in jail on sedition and terrorism charges.

Karachi on Wednesday elected as mayor a politician who is currently in jail on sedition and terrorism charges, a day after the leader of his party was charged with treason.

Waseem Akhtar, a former minister and parliamentarian of the influential Muttahida Qaumi Movement (MQM), won the mayoral poll by a landslide with 196 of the total 294 votes cast by the city’s municipal authorities.

Akhtar was arrested in July and accused of ordering a crackdown on city riots in 2007, when he was serving as provincial home minister, that resulted in a bloody massacre. Later he was also booked on sedition and terrorism charges.

The MQM has long dominated Karachi’s politics, largely thanks to the support of Mohajirs, a group of well-off Muslims who migrated from India in the 1940s. The movement has a stranglehold on the council of the Karachi Metropolitan Corporation, which elected Akhtar, the MQM’s chosen candidate, from among its members.

“I have been languishing in jail for the past month on false charges, but the people have voted for me,” Akhtar told media outside the Karachi Metropolitan Corporation building before being escorted by police to a prison van. He vowed to seek his freedom in court—but said if he is denied, he will “solve the public’s problems from jail.”

Akhtar was elected after a turbulent two days in Karachi politics that centered on his party’s exiled leader, Altaf Hussain. MQM activists clashed with police and ransacked the offices of ARY TV in the city on Monday, leaving at least one man dead and seven injured, after Hussain gave a telephone address to supporters from London in which he castigated the media for their coverage.

Security forces arrested some of his party leaders and shut down their headquarters before charging Hussain with treason and inciting terrorism Tuesday. His own second-in-command, Farooq Sattar, disowned him at a press conference later that day, accusing him of repeatedly embarrassing the party and vowing the MQM should be run from Pakistan.

Akhtar appeared to be trying to distance himself from the furor on Wednesday. “I am not the mayor of MQM. I am the mayor of Karachi,” he said.

The MQM, run by Hussain from London, has long been blamed for ethnic violence in Karachi, and accused of using extortion and murder to cement its grip on power. It has clashed repeatedly with authorities who, according to rights groups, have resorted to hundreds of extra-judicial killings during a “clean up” operation that began in 2013 in a city already plagued by violence.

Last year Pakistani police registered a case under terrorism laws against Hussain over a speech criticizing the country’s military establishment. Previous charges have not resulted in action or extradition requests against Hussain, who has lived in London since fleeing a military operation against his party in 1992 and is a British citizen.

Hussain remains a highly influential figure in Karachi, Pakistan’s economic center and main port, though observers believe his grip on power is gradually diminishing in his absence and his party is no longer the force it once was.