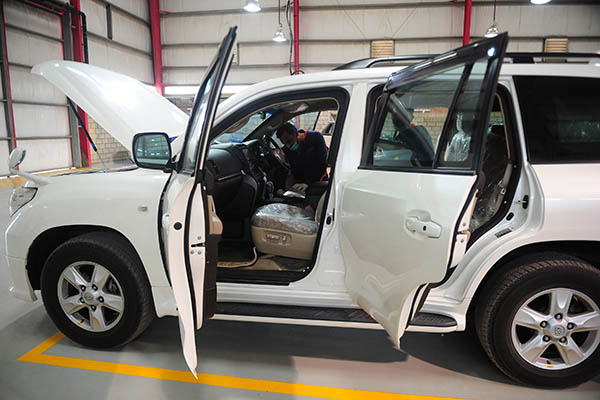 As an unprecedented wave of killings and kidnappings hits Karachi, the city’s elite are splashing out big bucks to ensure their luxury cars are bomb and bulletproof.

The sprawling metropolis of 18 million people on the Arabian Sea is Pakistan’s economic heart, with ranks of factories, import-export wheeler-dealers and slick bankers. But it is also the crucible of the country’s worst excesses of violence, criminality and inequality.

Bloody gang wars fed by ethnic and political bitterness, drugs and the Taliban, and a steady drumbeat of “mafias” have created a culture of impunity under the stunned gaze of police.

Like many successful businessmen in the city, Nadeem Khan, who owns pharmaceutical labs and marble workshops, feels threatened and has no faith in the ability of the authorities to protect him.

“Karachi is more dangerous than Kabul. We have police here and we have Rangers (paramilitary) here but they won’t lay a hand on the criminals,” he said. “So the people are compelled to have themselves secured by having their own personal bodyguards and armored vehicles.”

The epidemic of killings and kidnappings shows no sign of slowing, so those who can afford it are kitting their cars out with windows that can stop an AK-47 bullet and chassis that will survive a bomb attack.

Khan recently armored two of his 4x4s and is waiting for two more to be completed for his father and brother. “I got threats many times. I am the head of the law and order committee of the Korangi Industrial Area and there are so many dacoits (bandits) and robbers there,” he said. “There are bhatta (extortion) groups—they always hurl threats on the phone.”

These are worrying times for Karachi’s rich but boom times for companies such as Streit, which armors vehicles. Khalid Yousaf, head of Streit Pakistan, says business has doubled since they started work in December.

In a spotless workshop with a polished concrete floor set amid the city’s carpet of dust and dirt, a team of Streit mechanics work on a dozen stripped-down 4x4s.

The hulking Toyota Land Cruisers are no more than skeletons: an engine, wheels and chassis with no bodywork, doors or seats. The mechanics insert thick metal plates, laser-cut for a precise fit, into the doors, reinforce the floor, fit bulletproof windows, protect the battery with a metal cage and beef up the suspension to cope with the extra ton of steel and glass that has been added.

All this costs anything between $30,000 and $45,000, said Yousaf—an incomprehensibly huge sum for most Pakistanis. But the rich are happy to pay for peace of mind, and the armorers’ business is booming.

“We were expecting at the beginning to armor three to four cars per month, but initially in the first months and onward we had seven cars, then 10,” he said. “Now we are around 15 cars per month. Maybe it is going to increase even more.”

Discretion is a valued commodity in the armored car business and other firms were reluctant to discuss business on the record, but several spoken to by AFP confirmed that orders were on the rise.

“Before, we were watching movies where in Mexico or South America people were roaming in armored vehicles,” according to one salesman. “We were amazed to know why they were doing this, but now it is happening here in Pakistan—rich and famous people are asking for their safety and are moving around in armored vehicles.”

Media executive Saif—not his real name—said many in Karachi had felt the kidnap threat get closer and closer in recent years. “Previously, it was three or four degrees of separation. It’s now one degree of separation away,” he said. “When it is one degree of separation away and people you know, that means you have to make the blanket assumption that it will happen to you. It’s not a matter of whether it will—it will. It’s just a matter of are you protected enough?”

And an armor-plated skin is no guarantee of safety in Karachi—last month Bilal Shaikh, a security chief for President Asif Ali Zardari was driving in his armored car when he was attacked. His driver opened the door and a suicide bomber threw himself into the car before blowing himself up, killing Shaikh instantly.

Rest assured that the private guards in Pakistan have no training in weapons or hand to hand combat. I teach close quarter combat to the SSG-N and consult for two private security firms. I have test-fought (sparred) against 3 to 4 of their ‘veteran’ guards at a time and defeated them with ease. “Ease” here refers to their inability to absorb a hit, block effectively, low combat/reaction speed and complete lack of conditioning for throwing strikes or maneuvering them. I urge the elite to not only invest in these security measures, but also train themselves in multiple scenarios where hand to hand combat, knife combat and hand held weapons need to be used. Leaving any of the three up to private guards is a risk better not taken. As the last paragraph here states, the driver opened the door without looking around? That’s some hardcore poor planning or no training whatsoever in protocol management.