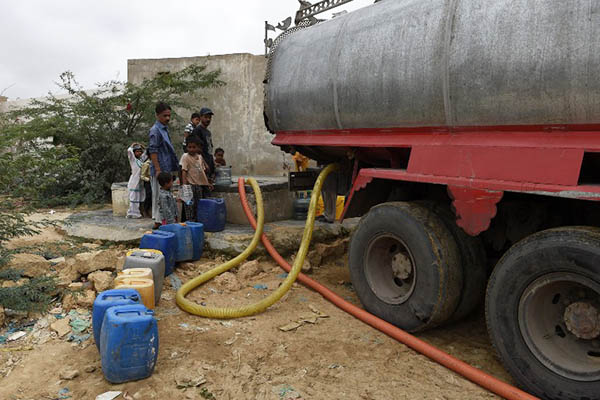 Organized gangs are forcing residents of Pakistan’s largest city to buy water from them at exorbitant rates.

The moment they saw the city water tanker stop in their neighborhood, Mohammed and Nayla rushed toward it. That day, the water was free—a rare event in Karachi, where organized gangs siphon it off to sell to thirsty residents.

In Sadiqabad and other Karachi slums, water barely flows through the pipe meant to supply the shacks packed along the rutted earth lanes. The shortage doesn’t just annoy the millions of residents in Pakistan’s largest city—this summer it exacerbated the effects of a heatwave which killed more than 1,200 people.

Over recent decades Karachi has expanded in an uncontrolled, unplanned way, booming from 500,000 to 20 million inhabitants in the space of 60 years and sprawling over an area 33 times the size of central Paris. The coastal city pumps around 2.2 billion liters of water a day from the Indus and Hub rivers, which have seen their flow reduced by insufficient rains in recent years.

But it is not enough to meet demand in a metropolis where the vital textile industry gobbles up huge amounts.

Mohammad Akeel Siddiq works in one such factory, earning Rs. 10,000 a month with which he supports his wife Nayla and their five children. From time to time the Karachi Water and Sewerage Board (KWSB) fills the reservoir in their neighborhood and residents flock to it. But the rest of the time they turn to the semi-clandestine mafias that control the lucrative trade in water distributed by tankers.

The family pays up to $15 a month for water—which is not even always safe to drink. “The water is polluted and dirty so we only use it for washing and cooking,” Nayla told AFP. “The children sometimes get diarrhea when they drink that water.” As a result the family are sometimes forced to use money they should spend on food to buy clean drinking water.

The water mafias dig tunnels to tap into the mains supply, stealing millions of gallons a day, said Iftikhar Ahmed Khan of KWSB. “These illegal hydrants are established by armed people, so it is very difficult for KWSB staff to just dismantle them,” he said.

In recent months government forces on a major anti-crime crackdown in the city have shuttered 200 illegal water connections, forcing many tankers to refill from KWSB and pay fees of $1-2 per 3,700 liters. The water is then resold for at least 10 times that price a few kilometers away in slums, posh neighborhoods and industrial areas.

“There is an enormous amount of demand… [but] there is no regulatory check of the price the tankers are charging to the customer,” said Noman Ahmed, an expert on the water crisis at NED university in Karachi. On the ground the gangs continue to steal from the network while others pump directly from the groundwater table to resell what is undrinkable saline water.

Karachi’s textile factories—the lifeblood of the Pakistani economy—use hundreds of millions of liters of water a day producing fabrics, T-shirts and jeans, many of which are exported to the West. One industrialist speaking on condition of anonymity admitted paying bribes to ensure the water kept flowing to his factory, but said even then he was sometimes forced to turn to the tanker gangs.

Many rich people are investing in powerful suction pumps to draw what water there is from the mains—thereby depriving their neighbors of their supply.

Karachi is on the Arabian Sea, but desalination costs are prohibitively expensive—and, with the water table falling and the population continuing to boom, it seems the city’s water woes are only just beginning. “The government says there are water shortages,” said Abdul Samad, resident of the poor Metroville area. “But we see tankers in our neighborhood every day—where’s that water coming from?”