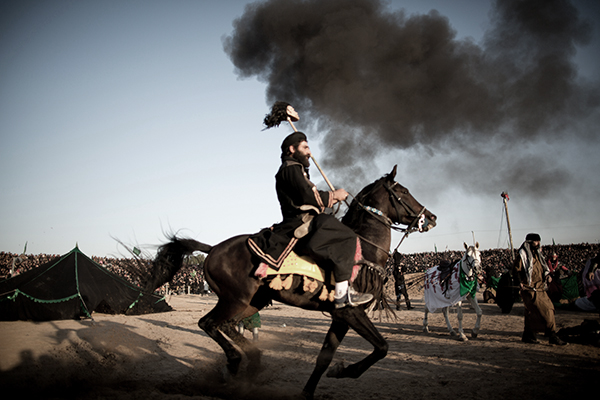 Reenactment of the battle of Karbala in Iran, Nov. 15. Behrouz Mehri—AFP

The Muslim world’s most dangerous enemies come from within.

At Karbala in the year 680, the supreme act of resistance and rejection by the grandson of Islam’s Prophet was universalized and etched in perpetuity. Imam Hussain’s resistance flowed from the conviction of his faith. By resisting a tyrant’s demand for allegiance, he rejected all that was unjust, corrupt, depraved, and decadent. At Karbala, Imam Hussain fought not merely against one sinful individual and his army but against malevolent attempts to defile Islam. Centuries later, his sacrifice still resonates—it is recounted year after year across the Muslim world, its rationale and essence allegorically relived.

Imam Hussain’s martyrdom is a living inspiration for all those who seek to reject the ugly, all that demeans and distresses the human spirit. Its narrative of resisting with titanic courage exploitative political constructs bears universal appeal. And so, the appropriation or rejection of Imam Hussain’s narrative by any sect belittles the legacy of Islam and revises unscrupulously the real lessons of Islamic history. Imam Hussain’s martyrdom was the bookend to his life of valor, dignity, compassion, and generosity—qualities with which he led his people and that remained undimmed as his family faced annihilation.

The battle of Karbala was forced upon Imam Hussain and his army of 72, who had no choice but to respond to the battle cry of the tyrant, Yazid. Heart-wrenching stories from Karbala still move millions to tears; they motivate countless more to stand up for what is just and to resist what defies the essence of Islam. Imam Hussain at Karbala and Bibi Zainab—his sister, who bravely led the followers after Karbala—in Damascus together shaped the triumph of Islam. It is this legacy that we can draw upon today for inspiration and guidance.

There are millions of Muslims around the world who live peaceful and honest lives. But the continuing and growing crises across Muslim-majority states signal deadlier times to come. The Muslim world today is stunted by the self-perpetuation in power of men masquerading as crusaders of Islam, sectarian vigilantes wage war in a bid to “purify Islam,” and all that is unholy and blatantly political is dressed up as “Islamic” to deny and suppress legitimate scrutiny. The fervor we experience today has little to do with the values and God’s message delivered to us through Islam’s Prophet.

There is much that is said, rightly and wrongly, to explain the present sorry condition of Muslim states; the causes of decay are both internal and external. But the responsibility to set things right is ours alone. And to get there, Karbala—where the family of Islam’s Prophet was confronted, humiliated, and devastated by a Muslim adversary—provides a good starting point. Bridging the deadly divides within the Muslim world makes it essential to woo back the misguided. But, equally importantly, we must also recognize that the antithesis of Islam, too, flows from within our own ranks. Imam Hussain recognized this, and sacrificed himself trying to change it.

Zehra is a senior anchor with Capital TV.

“There are millions of Muslims around the world who live peaceful and honest lives. But the continuing and growing crises across Muslim-majority states signal deadlier times to come.”