Karzai Refuses to Be ‘Bullied’ 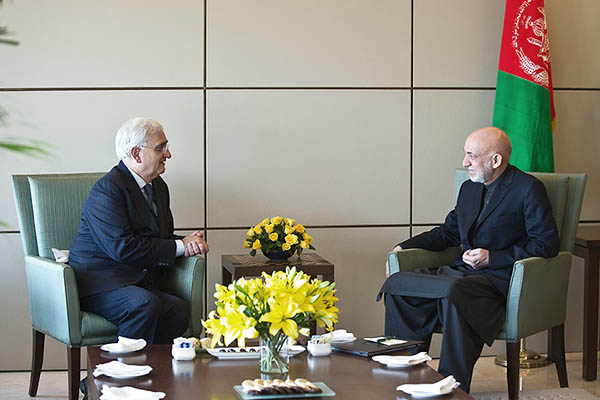 Afghan president tells Indian TV that he will not be pressured into signing Bilateral Security Arrangement with the U.S.

Hamid Karzai has said he would not be bullied into signing a security pact to allow U.S. troops to stay on after next year, as he tried to persuade India on Friday to provide more military assistance.

Karzai was to meet Prime Minister Manmohan Singh and Foreign Minister Salman Khurshid at the start of a three-day visit to India, with the United States hoping New Delhi can persuade him to ink the troubled pact.

A frequent visitor to India where he obtained his Masters degree in politics as a young man, Karzai enjoys close ties with New Delhi, which is keen to ensure that the exit of some 75,000 U.S.-led NATO troops at the end of 2014 does not trigger a return to power of the Taliban.

But speaking to Indian TV, Karzai said he would not be “intimidated” into signing the agreement which would allow 12,000 U.S. troops to stay in Afghanistan after 2014 and sets out their terms of engagement. “Aggressive rhetoric won’t work … We are not a nation that is known for giving into intimidation,” he said in an interview with NDTV. “If they have not recognized this they should, it will be good for them to recognize,” Karzai added ahead of his talks with Singh. “We will sign it when we feel sure that our signature will bring peace and security.”

Karzai, who is due to stand down after elections next year, initially endorsed the so-called Bilateral Security Agreement. But he later said the agreement could only be signed after the presidential election in April, warning against a NATO presence if it just meant “more bombs and killings.”

His stance has outraged U.S. officials and lawmakers, who have threatened a complete pullout if Karzai does not sign by the end of the year.

Testifying before a Senate committee this week, a senior U.S. official said he hoped India could help persuade Karzai to ink the agreement. “His upcoming visit to India could, I think, be quite influential, because he highly respects and has good relations with the Indian government,” said James Dobbins, the U.S. special representative on Afghanistan and Pakistan.

India has poured $2 billion in reconstruction aid into Afghanistan, and Karzai is expected to plead for further support, including military assistance, in his meetings. On his last visit to New Delhi in May, Karzai said he had put forward a “wishlist” of military assistance he hoped Delhi could deliver. India’s foreign ministry refused to detail what the list contained, but local media reports said it included light and heavy artillery, aircraft, and small arms and ammunition.

India has consistently pledged to do all it can to help promote stability in Afghanistan, mindful of how it was one of the main enemies of the Taliban regime before its ouster in the wake of the September 11 attacks in 2001.

While some observers have urged India not to become sucked into Afghan power battles, an Indian Express editorial said the government was right to beef up military support for Karzai to counter its archrival Pakistan, which was once the Taliban’s chief sponsor.

“While it must carefully weigh the regional consequences of supplying weaponry to Kabul, Delhi can’t ignore the dangers that will flow from the Pakistan Army’s likely advances in Afghanistan after 2014,” the newspaper claimed on Friday.

M. K. Bhadrakumar, a former Indian ambassador to Kabul, said Karzai could expect a warm reception in Delhi, but warned that he could not expect all of his wishes to be answered. “As far as the requirements of Afghanistan are concerned, both in terms of economic reconstruction and in terms of capacity building for Afghan armed forces, my understanding is that there are ongoing discussions,” said Bhadrakumar. “It is not as if Karzai comes with a wishlist and hands it over to Prime Minister Manmohan Singh and they take a red pen and green pen and keep ticking off items. It is not like this. Already there is a high degree of cooperation in the field of security and defense. Hundreds of Afghan officers are being trained in India and from (the) Afghan side, that is of much greater use than military hardware.”