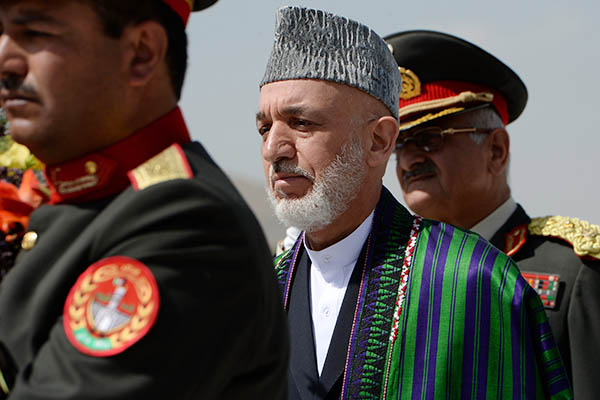 Afghan president will seek more releases in bid to resume peace talks with the militant group.

Afghan President Hamid Karzai will visit Pakistan on Monday to seek the release of key Taliban prisoners as he tries to restart peace talks with the militants after they collapsed acrimoniously.

Pakistan is seen as key to ending the 12-year conflict in Afghanistan before presidential elections in April and the withdrawal of most of the 87,000 NATO-led combat troops by the end of next year. Ties between the two neighbors appeared to improve at a summit hosted by Britain in February, but have since frayed badly in a series of public rows that rekindled long-held mutual suspicion.

Omar Daudzai, the Afghan ambassador to Pakistan, said he was confident Karzai’s visit would see progress on Afghanistan’s calls for Pakistan to release Taliban prisoners and to back the peace talks being led by the Kabul government.

“We will seek the release of some Taliban prisoners who are in Pakistani jails for political reasons and who are interested in peace talks, Mullah Abdul Ghani Baradar will be one of them,” he said.

The search for a peace deal is an urgent priority as Afghan forces take on the fight against the insurgents with decreasing help from the international coalition. But a Taliban office that opened in Doha in June to foster talks instead enraged Karzai as it was styled by the insurgents, who ruled Kabul from 1996-2001, as an embassy for a government-in-exile. The resulting dispute shut down embryonic peace efforts as Karzai threatened to boycott any future negotiations with the Taliban and broke off separate security talks with the United States.

Karzai has insisted on his government taking a central role in any peace talks, despite the Taliban’s refusal to open contact with him or his appointed negotiators as the rebels say he is a puppet of the United States.

“If Pakistan honestly contributes in paving the way for negotiations with the Taliban, the process will be Afghan-led,” Daudzai, a possible successor to Karzai, told Tolo television news.

Elements of the Pakistan state are widely accused of funding, controlling and providing shelter for the Taliban, but a senior Pakistani foreign ministry official said Islamabad backed all efforts to halt unrest in Afghanistan.

“Pakistan fully supports the Afghan peace and reconciliation process and also the Doha talks,” the official said. “The regional situation and post-2014 situation in Afghanistan will also be discussed during the visit. Pakistan has a genuine interest in lasting peace in Afghanistan.”

Pakistani officials have been tight-lipped about further prisoner releases.

Karzai, who has visited Islamabad regularly since he came to power after the fall of the Taliban, will be making his first trip since Prime Minister Nawaz Sharif was elected in May.

Analysts warned against expecting too much from the trip, which officials said was scheduled to start on Monday.

“Karzai is hopeful that he will be able to bring the Taliban to the negotiating table with the help of the new Pakistani administration,” said Abdul Waheed Wafa, analyst and director of the Afghanistan Center at Kabul University. “But we haven’t seen anything to conclude that they are prepared to change their long-term policy towards Afghanistan and give up supporting the insurgency.”

Pakistani analyst Hasan Askari said a great deal of distrust remained between the two countries and Karzai’s visit could at best create a “temporary thaw.”

“Karzai’s attitude toward Pakistan is due to his belief that Pakistan-based groups are creating unrest, while Pakistan says that militants hiding in Afghanistan are carrying out attacks in Pakistan,” Askari said. “Karzai wants dialogue, but he wants to control it himself.”

In one recent spat, Karzai’s chief of staff Karim Khorram claimed the Taliban office in Doha was part of a plot to break up Afghanistan, orchestrated by either Pakistan or the United States.

Afghan army chief of staff Gen. Sher Mohammad Karimi also said last month that Pakistan could end the Afghan war “in weeks” if it were serious about peace.

On Tuesday, Afghanistan beat Pakistan 3-0 in the first international football match in Kabul for 10 years in an event promoted as a symbol of friendship between the two countries.