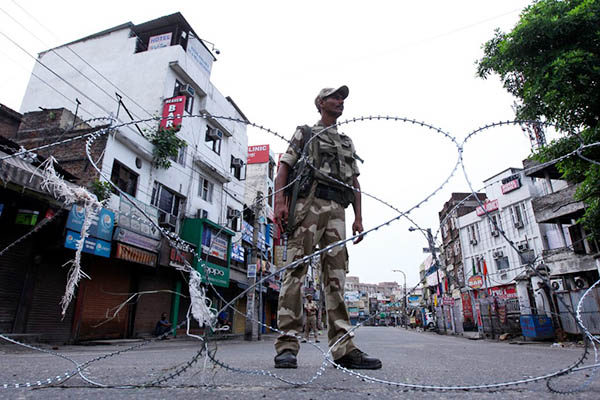 India’s home affairs minister on Tuesday hailed “historic” legislation to bring Kashmir under its direct control, as New Delhi stepped up its clampdown on dissent in the restive Muslim-majority region.

Three high-profile political leaders in Kashmir were detained for being a threat to peace hours after Home Affairs Minister Amit Shah announced on Monday that the president had scrapped Kashmir’s special autonomous status.

Shah also moved legislation for splitting the disputed territory into two and bringing Kashmir under Delhi’s direct control. The bill was passed by the upper house late on Monday and was set to sail through the lower house where the government holds a sizable majority.

Shah, a powerful aide of Prime Minister Narendra Modi, compared the move to other “historic moments” in the nation, adding that the law should be “written with golden words in Indian history.”

“The great parliament which has expressed its views on unity and integrity of India so many times today is once again going to deliberate on a bill that will go on to further integrate Jammu and Kashmir to India for many generations ahead,” he told parliament on Tuesday.

In India-Occupied Kashmir, a court order seen by AFP on Tuesday declared that former chief ministers Mehbooba Mufti and Omar Abdullah along with regional party leader Sajjad Lone had engaged in activities “likely to cause breach of peace” and lead to a “serious law and order situation.”

News of their detention came as national security adviser Ajit Doval said in a report to the home affairs ministry on Tuesday after visiting India-Occupied Kashmir that there was “peace and normalcy” and “no agitation” after the announcement, local media reported. But with mobile and internet shut down and Kashmir virtually cut off from the outside world since the early hours of Monday, there were no independent reports of what was happening on the ground.

Before being moved, Mufti said on Twitter that ending India-Occupied Kashmir’s special status had reduced “India to an occupation force in Jammu and Kashmir.”

Criticism mounted from opposition politicians on Tuesday, with Rahul Gandhi, until recently the head of the main opposition Congress party, saying the decision was an “abuse of executive power” that had “grave implications for our national security.”

“National integration isn’t furthered by unilaterally tearing apart J&K, imprisoning elected representatives and violating our Constitution. This nation is made by its people, not plots of land,” he wrote on Twitter.

Monday’s decree, rushed through by Modi’s right-wing Bharatiya Janata Party (BJP) government, removed from the constitution the special status that Kashmir had held since the region was divided between India and Pakistan in 1947. The changes ended special privileges for Kashmiris in regards to owning property and reserved jobs.

Pakistan, India’s neighbor with which it has fought two wars over Kashmir, immediately condemned the move. “Pakistan will exercise all possible options to counter the illegal steps,” its foreign ministry said in a statement on Monday.

The announcement has also sparked chaotic scenes in India’s parliament, with opposition members in the lower house grilling the BJP if it wanted to scrap the special status of several other states next.