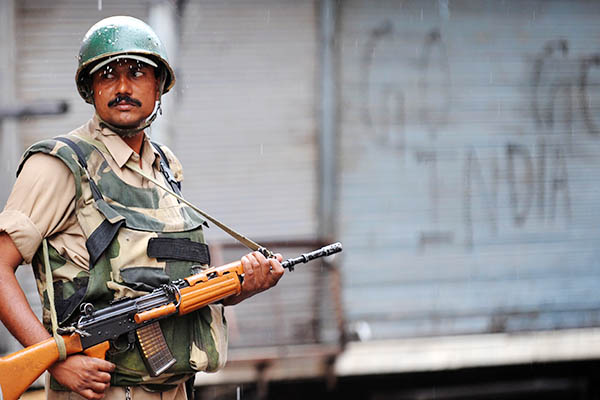 Hardliners say ‘thousands’ of militants will leave Afghanistan as NATO exits to resume fighting in Kashmir.

Kashmiri militants are threatening an “unprecedented” surge in attacks on Indian targets as deadly skirmishes imperil any rapprochement between Pakistan’s new government and New Delhi.

A fresh influx of battle-hardened fighters is ready to flood the disputed Himalayan territory, where India and Pakistan have fought two wars, from Afghanistan when NATO troops quit next year.

Syed Salahudeen, the head of United Jihad Council, an umbrella organization of groups fighting against Indian rule in Kashmir, said “thousands” of militants would move across from Afghanistan. “The coming months and years will see a tremendous surge in mujahideen’s activities in Indian-administered Kashmir,” he said. “The encounter between mujahideen and Indian forces will enhance to an unprecedented level. The increase in attacks will be enormous and Indian forces will face huge losses.”

Regular deadly exchanges of fire across the heavily militarized Line of Control (LoC) that separates Indian- and Pakistan-administered Kashmir have killed 11 people since Aug. 5 and sent tensions between the nuclear-armed neighbors soaring. The latest spate of clashes began when five Indian soldiers were killed in a raid that Delhi blamed on the Pakistani military.

The attack came shortly after Pakistan’s new Prime Minister Nawaz Sharif took office, promising to improve ties with India. Pakistan flatly denied any involvement in the killings and Sharif has consistently urged restraint and dialogue to resolve the dispute, which dates back to independence from Britain in 1947.

Sharif also wants to meet Indian Prime Minister Manmohan Singh on the sidelines of the U.N. General Assembly next month, although New Delhi has since warned the violence may make this impossible.

Militants now claim they no longer need the clandestine support of the Pakistani security establishment, signaling that the conflict in Kashmir is increasingly out of Pakistan’s control.

A dozen rebel groups have been fighting in the Indian-held portion of Kashmir since 1989 for independence or its merger with Pakistan, killing tens of thousands of people—most of them civilians. By the mid-1990s, separatist ranks had swelled with foreign “jihadi” fighters from Arab countries, Afghanistan and Pakistan. Many of them were veterans of the 1980s war against Soviet troops in Afghanistan, which ultimately gave birth to Al Qaeda.

Pakistan’s powerful security establishment nurtured the mujahideen at the time, using Saudi and U.S. cash, as a tool to bring down the Soviets and flex their own influence in Afghanistan. But militant groups have bitterly opposed Pakistan’s post-9/11 alliance with the United States and claim to operate independently.

Pakistan has faced a bitter backlash in the form of a Taliban-led insurgency that has killed thousands of people.

“Kashmiri youths realize that they should now rely on themselves,” said Uzair Ahmed, a militant with the Hizb-ul-Mujahideen group. “The attacks on Indian forces by Kashmiri mujahideen have already been enhanced during the last three to four months … and the coming three-four years will be very difficult for the Indian forces.”

“We, the citizens of Pakistani Kashmir, will also provide them support, whatever they require from us, because fighting to free our homeland is our basic duty,” he said.

A deadly flare-up along the LoC in January halted peace talks that had only just resumed after a three-year hiatus sparked by the 2008 attacks in Mumbai, which India blamed on Pakistani militants. Delhi and Islamabad agreed a ceasefire in 2003 after the Pakistan Army’s incursion in the Kargil sector in 1999 brought the two countries to the brink of war.

India says the number of infiltration attempts across the LoC in January to August this year doubled compared with the same period last year. But a senior official in the Indian army’s northern command said “almost all” the attempts to smuggle fighters across the LoC had been thwarted.

“It is usual during the summer months that infiltration attempts by militants increase because the mountain passes are open,” he said on condition of anonymity.

India still accuses Pakistan of providing logistical help to the fighters, though Islamabad insists it extends only moral and political support.

Progress on the issue is hampered by political considerations—both governments face criticism from hardliners if they make any kind of conciliatory move. Sharif in some senses is in a strong position, having won a landslide election in May, although it is Pakistan’s powerful Army that is considered the final arbiter of foreign policy.

Some analysts believe that without the old enemy India, the Army fears the loss of money, prestige and influence. And with an election looming in India next year, analysts also warn the weak Congress-led government they cannot afford to look soft on the old enemy either.

the RSS wanted to build its own suicide cadre, to infiltrate Pakistan, and give it a taste of its own medicine. Talks, talks, and talks with give and take, is the only way of bringing about a lasting solution