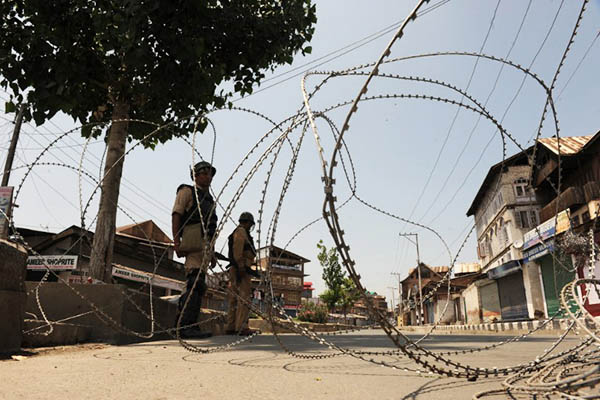 Analysts say New Delhi had worried that an independent Scotland would fuel independence movements in India.

Militants have been fighting New Delhi’s rule in India-administered Kashmir for a quarter of a century and while violence has diminished, the issue of self-determination is still a divisive one in the scenic region. The Scottish referendum in which voters rejected independence by a 55-percent majority shows “the democratic character in Britain is very much alive,” said veteran separatist leader Syed Abdul Rehman Geelani.

“Freedom to choose is a basic right which should not be snatched from any nation as India has done in Kashmir for over six decades. It is inhuman,” he said. “India should learn from Britain and Kashmir should also get its right to self-determination,” Geelani added.

Kashmir has been a flashpoint in South Asia since the subcontinent was divided by Britain at independence in 1947 into India and Pakistan. Tens of thousands of people, mainly civilians, have died in the conflict that erupted in India-administered Kashmir in 1989 in which around a dozen groups have been fighting for the region’s independence or merger with Pakistan.

India and Pakistan have fought two of their three wars over Kashmir. Both countries claim Muslim-majority Kashmir and each rule it in part.

India did not voice an official opinion about Scotland’s referendum, however, Indian foreign minister Sushma Swaraj expressed horror last week in an unguarded moment at the prospect of Britain’s break-up. She told reporters: “God forbid,” before swiftly correcting herself and saying it was up to voters in Scotland to decide.

Indian newspapers said New Delhi had worried that a Scottish vote in favor of separation would fuel independence movements in Kashmir and the northeast.

In Pakistan-administered Kashmir, Uzair Ahmed Ghazali, a leader of the pro-Pakistan militant group Hizbul Mujahideen, also praised Britain’s move to allow voters in Scotland to decide on their future. “The way Britain held the referendum proved that it is a great democratic country,” said Ghazali. “We will make this referendum in the U.K. a role model for our [Kashmiri] freedom movement,” he said.

Abdul Rasheed Turabi, head of the Kashmir chapter of the Jamaat-e-Islami religious party, said, “India should not claim it is a democratic country because it is not respecting the peoples’ opinion.” New Delhi insists that all of Kashmir is an integral portion of India.

Kashmir a region almost the size of the United Kingdom should get her independence. The Kashmiri people have faced the intrusion of foreign armies on her land from India, Pakistan and even China. Parts of Kashmir have been given away to China while she remains divided by India and Pakistan.

In this sense the people of Kashmir have no voice of their own and subject to the whims of New Delhi, Islamabad and Beijing. An independent Kashmir would share borders with 2 of the world’s largest economies (China and India), 1 Security Council Member (China), be free to be a member state of Russia’s CSTO (Collective Security Treaty Organization) and/or China’s SCO (Shanghai Cooperation Organization), a new member of SAARC and control the waters that make up many rivers of her neighbors.

Independent Kashmir would emerge as one of the most strategic nations in the world with her own military and air force. She would lessen the tensions between India and Pakistan by having her own voice outside of Islamabad and New Delhi. An independent Kashmir would be home to Muslims, Hindus and Buddhists, and her beauty and history would make her one of the most enchanting tourist spots in the world.

There are many more reasons why Kashmir should become independent outside of being a stabilizing force in the region. A recent book titled “America Shattered united no more” by Columbus Falco outlines in 50 pages why a nation should be born in the early years of the 21st century. It is on Kindle and Amazon.