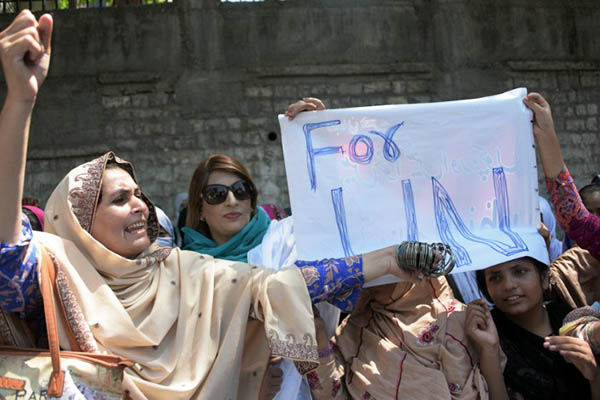 Women in Pakistan-administered Kashmir offered their bangles to Ban Ki-moon on Tuesday, an insult in patriarchal South Asia aimed at the U.N. head’s perceived inaction over violence on the Indian side of the disputed region.

Hundreds of refugee women marched in Muzzafarabad, capital of Pakistan-administered Kashmir, chanting slogans against the U.N. and India as some clutched their bangles in their hands in protest at the weeks of deadly violence.

Much of India-administered Kashmir has been under curfew since protests broke out over the death on July 8 of a popular young rebel leader in a gunfight with security forces. More than 60 civilians have been killed in clashes between protesters and police and troops and thousands more injured in the worst violence to hit the restive region since 2010.

Hospitals have reported hundreds of young men and boys suffering serious eye and other injuries from the pellets.

“If the secretary general of the U.N. Ban Ki-moon can’t help Kashmiris, he should wear these bangles and rest,” said protester Irshad Qureshi, clutching her bracelets. Others held placards saying the bangles were “For U.N.” The protesters also burnt the Indian flag.

Bangles are deeply embedded in female identity in Pakistan. To offer the delicate bracelets to a man is to say he is acting like a woman—still seen as an insult in some parts of the country, where women have been fighting for their rights for decades.

What is the role of Difa-e-Pakistan Council in the protest movement for liberation of Kashmir. Were sons of Maulana Samiul Haq and Hafiz Saeed fighting with Burhan Wani in hills of Kashmir? Were Sheikh Rashid Ahmed and Abdullah Gul also fighting in mountains of Kashmir? There is no use of raising slogans on the roads of Islamabad and Lahore for Kashmir!
Pakit.pk/kashmirion-per-rehm-ki-zaroorat-20-aug-2016/