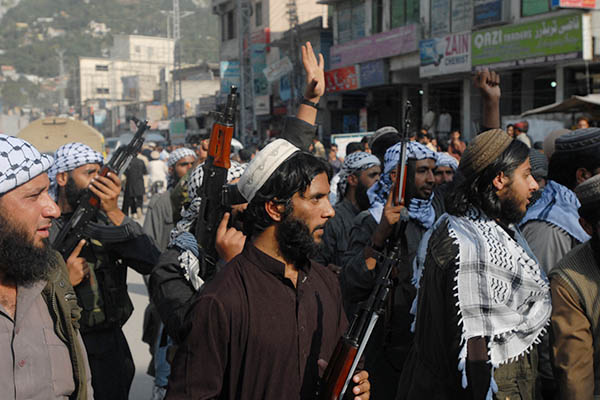 Thousands of Kashmiri people observed a “black day” in Pakistan-administered Kashmir on Sunday, rallying at an event organized by Islamists against Indian “brutalities” and occupation of the Himalayan region.

The rally was set up by the United Jihad Council (UJC), which consists of 16 Islamist groups, militant outfits and political parties, and was attended by jihadi groups including Hizb-ul-Mujahideen and Lashkar-e-Taiba (LeT).

A crowd of around 3,000 people shouted “Al-Jihad”, “Allahu Akbar” (God is Great) and “We want Freedom” as they gathered in Muzaffarabad, the capital of Pakistan-administered Kashmir, said an AFP reporter at the scene.

“Diplomacy, talks and negotiations spanned over several decades have not worked,” said Syed Salahuddin, chairman of the UJC. “The only way to liberate Kashmir is jihad and armed struggle because India does not understand the language of dialogue,” said Salahuddin, who also leads Hizb-ul-Mujahideen, a militant group fighting Indian rule in Kashmir.

The protesters waved black flags and shouted: “Our struggle will continue till Kashmir is freed,” and condemned Indian “brutalities”, as Salahuddin appealed to the government and people of Pakistan to fully support Kashmiri independence.

Kashmiri people observe Oct. 27 as a “black day” every year to protest the arrival of Indian troops and their invasion of the Himalayan region in 1947.

Kashmir is held in part by Pakistan and India, but claimed in full by both, and has been the cause of two of the three wars the countries have fought since independence from Britain more than half a century ago. Muslim separatists have fought a 20-year insurgency against New Delhi’s rule in Indian-administered Kashmir. Kashmiris in both Indian and Pakistani administered zones want Islamabad and New Delhi to agree to a referendum on self-determination.

“A durable solution to the problem is possible only if Kashmiris are allowed to exercise their right to self-determination under the U.N. resolutions,” he added.

A spate of cross-border skirmishes this year have raised tensions between India and Pakistan. A deadly flare-up along the Line of Control (LoC), the heavily militarized de facto border between Pakistan and India in Kashmir, in January stalled peace talks that had only just resumed following a three-year hiatus sparked by the Mumbai attacks.

Delhi blamed that ambush on the Pakistan Army, but Islamabad denied the claims and has repeatedly called for restraint and dialogue.