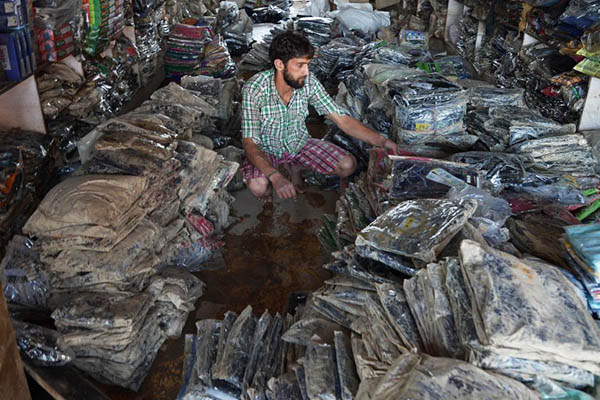 President of the Chambers of Industries estimates losses of at least $5 billion.

More than 450 people were killed when the floods, triggered by heavy monsoon rains, swept this month through the Himalayan region and into neighboring Pakistan, leaving hundreds of villages submerged and tens of thousands of residents homeless.

As the waters recede and the clean up finally begins, business owners, including those selling Indian-administered Kashmir’s most famous exports, are beginning to count their losses—at least $5 billion by conservative estimates.

“My 35 years of earning is gone,” Yahya said outside his home in Srinagar as waterlogged carpets collected from one of his showrooms were unloaded from a truck. “The loss is incalculable,” a grim-faced Yahya added, staring at muddy bundles of what had been handspun fine cashmere wool to make Pashmina shawls. “Most of my finest carpets are lying elsewhere in the flooded city.”

Kashmiri carpets have traditionally been a major earner for the region, whose generations of weavers toil for months on wooden looms to produce single intricate pieces that sell for thousands of dollars in the West. Carpets and other handicraft businesses have long thrived even as the troubled Muslim-majority region has endured an insurgency against Indian rule in favor of independence or merger with Pakistan.

But scores of carpet showrooms now lie under water after Srinagar’s Dal Lake burst its banks, sending residents fleeing for higher ground. Many of the handlooms have also been destroyed and hundreds of people are out of work. “It may take one year to recover, it may take 50. It depends on Allah,” says the 55-year-old Yahya, who travels to Europe, Southeast Asia and the U.S. every year to sell his carpets.

From carpets and saffron, another famed Kashmir export, to apples, walnuts and gold jewelry, business owners are returning to their flood-wrecked shops to find tons of goods gone or destroyed. “Our most conservative estimate of loss is at least 30,000 crore rupees ($5 billion),” said Ashraf Mir, president of the Federation Chambers of Industries Kashmir (FCIK). “Our main commercial hub [in Srinagar] was the worst hit,” he said, adding that the figures were likely to be higher because most of the Kashmir Valley’s 500,000 traders under-insured their stock.

Mir himself runs a steel fabrication plant employing 100 people. “I can’t support my staff under the circumstances,” he said. He said many business owners including farmers lost financial records, making it difficult for them to seek help from banks and other financial institutions. “Businesses need to rebuild fast for which liberal institutional help is a must,” Mir said. Many business owners were among the tens of thousands who also lost their homes. “Minimum documents, minimum time [to provide financial help] is the key,” he said.

In one of Srinagar’s main and oldest markets, Maharaj Bazar, mounds of ruined dried fruits and other goods line the road as shopkeepers begin the massive clean up. The stench of rotting foodstuff hangs in the air. “We had stocked to the fullest for the peak of marriage season in [Indian-administered] Kashmir,” said shopkeeper Mehraj-u-Din, as he loaded sacks of soiled almonds, cashew nuts, saffron and dates onto a truck to be thrown into the nearby Jhelum river which is finally receding. “Now everything is gone.”

Another shopkeeper who sells saffron and other spices said he had sold off his wife’s gold jewelry just before the floods to buy up more stock to cash in on the marriage season. “That doubled my loss,” Abdul Lateef said.

A few shops down, jeweler Pervez Ahmed was sifting through mounds of silt for some of the three kilograms of gold ornaments that had been displayed in his showroom. “I have not been able to salvage more than 10 percent,” said Ahmed who has three showrooms in the market. “Banks and insurance offices are locked and under water. No one is coming here to assess our losses,” he said.

Outside of Srinagar, farms that have long produced apples, pears, walnuts and other food are also ruined. The state government, criticized for its slow response to the disaster, said last week more than 200,000 acres of crops and orchards have been destroyed in Baramulla, just one of 10 Indian-administered Kashmir districts, which was only mildly hit by the floods.