Kerry Calls on Afghan Taliban ‘To Enter Into Peace Process’ 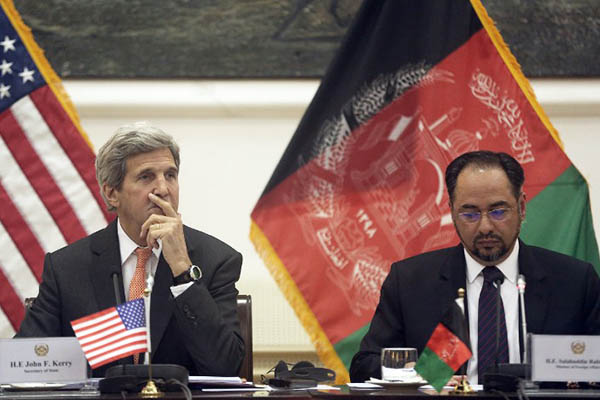 U.S. Secretary of State John Kerry on Saturday called on the Afghan Taliban to restart direct peace talks with Kabul, weeks after the militant group refused to return to the negotiating table.

“We discussed our shared goal of launching peace talks with the Taliban,” he told reporters at a joint press conference with Afghan President Ashraf Ghani in Kabul. “We call on the Taliban to enter into a peace process, a legitimate process that brings an end to violence,” he continued, adding: “Of course there is hope for peace.”

The announcement comes just over a month after the militant group, which has been waging a war against Kabul and U.S.-led international forces since they were toppled from power in 2001, refused to hold negotiations until preconditions including the withdrawal of foreign troops were met.

“We want to repeat our stance once again that until the occupation of foreign troops ends, until Taliban names are removed from international blacklists and until our detainees are released, talks will yield no results,” the group said in a statement on March 5.

Afghanistan, the U.S., China and Pakistan have formed a four-way group to try to jumpstart the talks that fell away after it emerged last summer the Taliban’s founder Mullah Omar was dead, leading to infighting within the group. The insurgency in Afghanistan has claimed tens of thousands of lives. The Taliban have stepped up their efforts and won numerous important victories following the withdrawal of foreign combat troops in 2014.