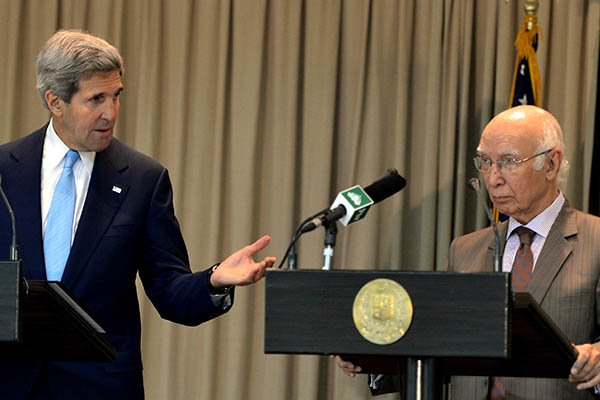 U.S. officials downplay secretary of State’s statement, saying there is no timeline for ending drone attacks.

It is the first time such a senior member of the U.S. administration has indicated there could be a definitive end to the program, which the CIA has in the past called an effective counterterrorism weapon. But the strikes are a major thorn in ties between Islamabad and Washington, and are officially condemned by Pakistan as a violation of sovereignty and international law.

Kerry waded into the row at the tail end of a visit to Islamabad, in which he announced that Washington was reviving its strategic dialogue with Pakistan for the first time after a series of crises in 2011. Asked in an interview by a Pakistani television station whether the strikes could end, Kerry said: “I think the program will end as we have eliminated most of the threat and continue to eliminate it.” Pressed on whether a timeline was envisaged, Kerry replied: “Well, I do. And I think the [U.S.] president has a very real timeline and we hope it’s going to be very, very soon.”

Pakistan’s top diplomat Sartaj Aziz had demanded a halt to drone strikes earlier in the day. But U.S. officials immediately sought to downplay Kerry’s remarks. State Department spokeswoman Jen Psaki said that the number of drone strikes had already declined owing to the drawdown of American troops from Afghanistan and because of progress in curtailing the Al Qaeda threat. “Today the secretary referenced the changes that we expect to take place in that program over the course of time, but there is no exact timeline to provide,” she said in a statement.

Pakistan’s new government, led by Nawaz Sharif, is likely to seize upon Kerry’s remarks as a coup. A spokesman for the foreign ministry late Thursday welcomed Kerry’s remarks, saying it was Islamabad’s longstanding position that they should stop.

Kerry’s television remarks strayed from what he told a press conference with Aziz, when he tackled complaints about drones by pointing the finger at Al Qaeda leader Ayman al-Zawahiri, believed to be based in Pakistan. “An Al Qaeda leader like al-Zawahiri is violating the sovereignty of this country. And when they attack people in mosques and blow up people in villages and market places they are violating the sovereignty of the country,” he said.

On Afghanistan, Kerry said he was confident that Washington and Kabul would reach a long-term security agreement that would allow American troops to remain in the country beyond 2014. “We’re making progress, we’re working on it. I am personally confident that we will have an agreement,” Kerry said. Afghan President Hamid Karzai suspended talks on the deal in June, furious that a Taliban liaison office in Qatar appeared to have been opened as an embassy for a government-in-waiting. “Let me be clear: the U.S. is drawing down, not withdrawing,” Kerry said. There are concerns that a complete departure of foreign troops in late 2014 could leave Afghan government troops too weak to contain a Taliban insurgency and possibly see the country slide back into civil war.

Kerry also announced the resumption of the so-called strategic dialogue between Pakistan and the United States, and he invited newly-elected Prime Minister Nawaz Sharif to hold talks with U.S. President Barack Obama in autumn. These would be the highest level talks between both sides since January 2011. That November U.S. airstrikes mistakenly killed 24 Pakistani soldiers along the Afghan border, leading Islamabad to shut down NATO ground supply lines for seven months. Kerry said it was time to put the relationship on a stronger footing.

Sharif has made economic growth and resolving the energy crisis the top priority of his new administration, but Kerry also stressed that prosperity depends on doing more to eliminate militant havens. “Pakistan cannot realize its full economic potential until it overcomes extremists,” Kerry told the news conference. “The choice for Pakistanis is clear: will the forces of violent extremism be allowed to grow more dominant, eventually overpowering the moderate majority?”

Meanwhile, commenting on the ongoing political crisis in Egypt, Kerry said the Egyptian military’s removal on July 3 of Islamist president Mohamed Morsi—the country’s first democratically elected president—had come at the request of millions, but he warned against further bloodshed. “The military was asked to intervene by millions and millions of people, all of whom were afraid of a descent into chaos, into violence,” Kerry told Pakistan’s Geo television, in comments that will be seen in Egypt as supportive of the interim rulers. “And the military did not take over, to the best of our judgment—so far. To run the country, there’s a civilian government. In effect, they were restoring democracy,” he added.