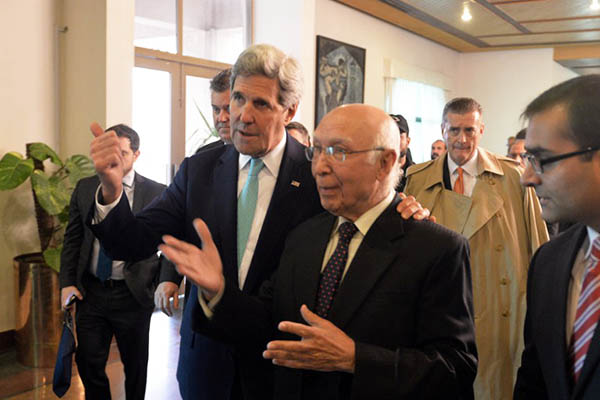 U.S. Secretary of State John Kerry appealed Tuesday to India and Pakistan to resume stalled peace talks, saying Washington was “deeply concerned” about a surge in violence on their de facto border in Kashmir.

“It is profoundly in the interests of Pakistan and India to move their relationship forward,” he told reporters in a joint press conference with Pakistani national security adviser Sartaj Aziz. “This is the hardest kind of work. It means you have to put a lot of time and effort into overcoming historical mistrust and past events, enmities,” Kerry said.

During earlier talks with Aziz, the top U.S. diplomat said the U.S. remains “deeply concerned by the increasing spate of increased violence along the working boundary and the Line of Control [in Kashmir].”

Aziz for his part appealed to Washington, telling the press conference: “We hope that the U.S. as an influential member of the international community can prevail upon India to work with Pakistan towards regional peace.”

Aziz insisted that Pakistan wanted “peaceful relations with all its neighbors, both our eastern and western borders.”

Kerry appeared to raise the pressure on India, which abruptly called off planned peace talks last August after Pakistan consulted Kashmiri separatists before the dialogue began. Some analysts saw the cancellation as a sign of a tougher stance by Prime Minister Narendra Modi’s new rightwing government.

Prime Minister Nawaz Sharif deserved “a lot of credit for his leadership in reaching out to his neighbors to build peace and understanding,” Kerry said. “The United States would do whatever we can to try and help” in bringing back India and Pakistan back to negotiations, the secretary of state vowed.

But he insisted that the enmity between the two sides was not something that the U.S. could end. “It is something that India and Pakistan will have to resolve between them, and it will take leadership that steps over these historical differences and is prepared to try to engage in a real dialogue about those things that matter to both sides.”

Pakistan and India, who have fought two of their three wars over disputed Muslim-majority Kashmir, have traded blame for the upsurge in firing and shelling which started on Oct. 6 last year. Recent exchanges of fire across the de facto border known as the Line of Control have killed more than two dozen civilians and forced thousands to flee their homes on both sides.

The United States was “concerned about the rise of the number of instances along the border of the Line of Control. Clearly it is in everybody’s interests to try to find a way to resolve these kinds of differences peacefully, and we encourage the parties to do so,” said Kerry.