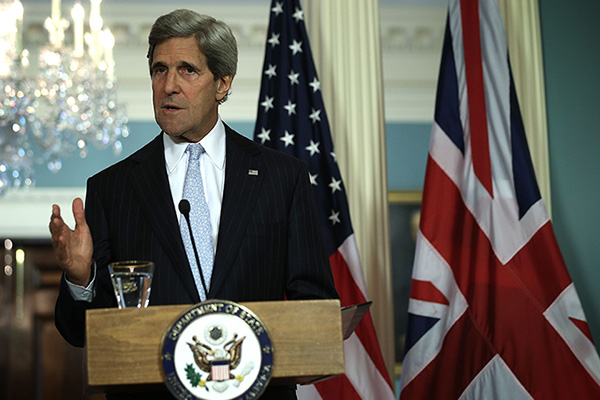 Foreign Office in Islamabad says U.S. secretary of state’s visit to Pakistan has been pushed to July.

U.S. Secretary of State John Kerry has been forced to delay a visit to Pakistan because of the worsening crisis in Syria, Pakistani officials said Tuesday.

The Pakistani foreign ministry said last week that Kerry would arrive in the last week of June for talks with the new government on issues including the fight against militants in the country’s northwest and NATO’s exit from Afghanistan.

But Washington made no announcement of the trip and on Tuesday a senior Pakistani official said it had been pushed back. “He was due here in the last week of June. Now his visit is likely in the first half of July,” the official said on condition of anonymity. “The Syria crisis shot up suddenly, so they had to reschedule the Pakistan visit. But they have conveyed to us that they want to come to Pakistan in early dates of July.”

U.S. State Department spokeswoman Jen Psaki on Monday said Kerry was “very much looking forward to travelling to Pakistan” but still gave no indication of when such a visit might actually take place. Kerry would be the most senior U.S. official to visit the country since Nawaz Sharif was sworn in as Pakistan’s new prime minister after elections on May 11.

Pakistan-U.S. relations are on the mend after virtually collapsing in a series of crises in 2011 including the discovery by U.S. commandos of Osama bin Laden hiding in Abbottabad. For seven months Pakistan also cut off NATO overland supply lines into Afghanistan after botched U.S. airstrikes killed 24 Pakistani soldiers near the Afghan border.

Pakistani cooperation will be vital as the U.S. withdraws the bulk of its forces from Afghanistan by the end of next year after more than a decade of war, and Sharif has promised his government’s support.

But the vexed issue of U.S. drone strikes targeting suspected Taliban and Al Qaeda militants in Pakistan’s tribal zones continues to dog relations, with Islamabad condemning them as a violation of sovereignty.