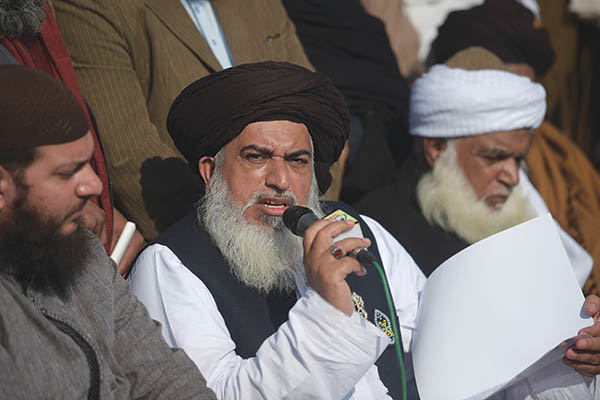 Pakistan’s information minister says over 3,000 people from across Pakistan were taken into custody during last week’s security operation

Khadim Hussain Rizvi and Afzal Qadri are among the leaders of far-right Tehreek-e-Labaik Pakistan that have been charged with treason and terrorism, Information Minister Fawad Chaudhry said on Saturday.

Addressing a press conference in Islamabad, Chaudhry told journalists that the accused had caused damages worth millions of rupees to public and private property during their protests against the acquittal of blasphemy accused Aasia Bibi, in addition to endangering public welfare. He said last week’s nationwide security operation against Labaik, which resulted in Rizvi being placed in ‘protective custody,’ had been the result of a joint effort between several government institutions. Opposition parties had also been taken onboard and supported the government’s actions, he added.

Chaudhry said that 2,899 people from across Punjab province had been taken into ‘protective custody’ during the security operation on Nov. 23. In addition, 139 people from Sindh and 126 from Islamabad had also been taken into custody. In addition to Rizvi and Qadri, Inayatul Haq Shah and Hafiz Farooqul Hassan have also been charged under treason and anti-terror laws, he added.

The Nov. 23 crackdown had been launched ahead of Labaik’s call to observe ‘martyrs’ day’ on Nov. 25. Rizvi had called on all supporters to gather at the Faizabad Interchange in Islamabad—the same venue that Labaik had brought to a standstill last year—to show their strength to the sitting government.

The far-right group, which emerged as the fourth largest political party in Parliament in terms of total votes obtained during the 2018 general elections, had earlier demonstrated across Pakistan against the Supreme Court’s acquittal of blasphemy accused Aasia Bibi. During the protests, the accused had reportedly called on members of the armed forces to mutiny in addition to trying to provoke the public against the elected prime minister and sitting judges of the Supreme Court of Pakistan. The government had negotiated an end to the protests by agreeing to bar Bibi from leaving Pakistan pending a review petition against her acquittal.

This is unbelievable act from the pakistan govt side because before this i cant remind that govt take action against Islamic Party.