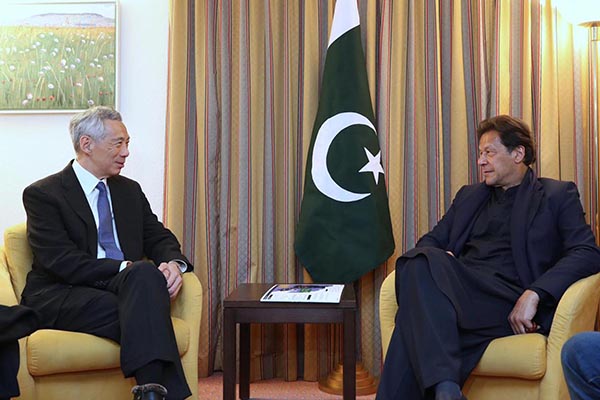 Prime Minister Imran Khan on Tuesday discussed the plight of residents of India-held Kashmir during bilateral meetings with the leaders of Singapore and Azerbaijan on the sidelines of the World Economic Forum (WEF) in Davos, Switzerland.

Aliyev and Khan discussed bilateral relations “marked by mutual trust and support.” According to the Foreign Office, the prime minister appreciated Azerbaijan’s contributions, including those undertaken as a member of the Organization of Islamic Cooperation Contact Group on Jammu and Kashmir. He also reiterated Pakistan’s support to Azerbaijan on the issue of Nagorno-Karabakh, the statement added. Nagorno-Karabakh is a disputed territory, internationally recognized as part of Azerbaijan, but mostly governed by the Republic of Artsakh.

Both leaders reiterated their mutual support for each other’s national causes and resolved to further deepen cooperation in all fields. Aliyev also invited Khan to visit Azerbaijan.

Khan, meanwhile, briefed the president on New Delhi’s ongoing human rights violations in India-held Kashmir as well as the regional impact of the Indian government unilaterally stripping the region of its special autonomous status.

Similarly, during his meeting with Singapore’s Lee Hsien Loong, Khan detailed the human rights violations in India-held Kashmir. Pakistan’s prime minister informed his counterpart that Pakistan’s business rankings were improving, and invited Singaporean businessmen and investors to “increase their footprint in Pakistan.”

According to the Foreign Office, both leaders expressed a desire to further deepen bilateral ties with a focus on increasing trade and investment.

Khan’s trip to Davos will continue today (Wednesday) with a keynote address at the WEF special session, and an interaction with corporate leaders at the Pakistan Strategy Dialogue. The prime minister is also scheduled to speak with senior international media persons and editors during a session with the WEF’s international media council.