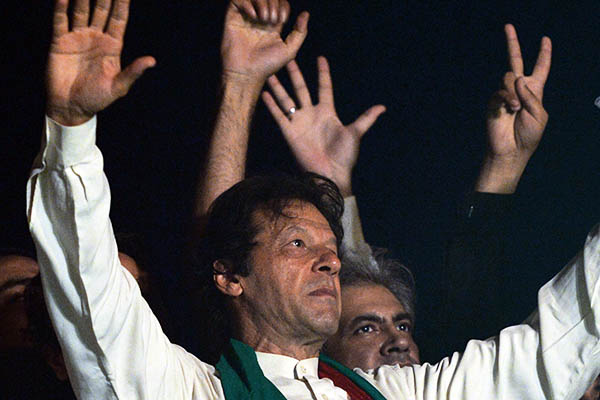 Pakistan’s opposition parties have distanced themselves from Imran Khan’s call for mass civil disobedience to unseat the government, as talks began to try to end a destabilizing five-day political standoff.

Khan, the cricketer-turned-politician who leads the Pakistan Tehreek-e-Insaf (PTI) party, led thousands of supporters from Lahore to rally in Islamabad to demand the government resign. On Sunday he appealed to the people to stop paying utility bills and taxes to the current government, accusing Prime Minister Nawaz Sharif of plundering the national wealth to enrich his business empire.

Khan and populist cleric Tahir-ul-Qadri, who led his own “long march” from Lahore, claim the May 2013 general elections, in which Sharif won in a landslide, were rigged. They had promised to mobilize hundreds of thousands of supporters to capitalize on popular dissatisfaction with the corruption, power cuts and insecurity that blight daily life in Pakistan and oust the government.

But Khan was left looking increasingly isolated on Monday as mass support failed to materialize and other opposition parties refused to rally to his call.

Former president Asif Ali Zardari, co-chairman of the Pakistan Peoples Party which is the largest opposition party, said Khan’s willingness to use “unconstitutional means” to pursue his goals threatened democracy. “Democracy and nation will not be served by calls for civil disobedience nor by a stubborn refusal by any side to engage in a meaningful dialogue on political issues,” Zardari said in a statement.

In response to the protests, the authorities have deployed tens of thousands of security personnel on the streets of the capital and blocked main roads with shipping containers, causing major disruption.

Siraj-ul-Haq, head of the religious political party Jamaat-e-Islami, who has played a key mediating role since the two protest marches began on Aug. 14, urged a negotiated end to the standoff. “We are against any move which can derail democracy. We want to resolve all the matters within the framework of law and constitution,” he said.

But sources said back-channel talks to resolve the row were under way on Monday and the government said it would soon announce cross-party committees to hold formal talks with PTI and Qadri.

Qadri, a dual national Pakistani-Canadian, has called for Sharif’s arrest over what he alleges was the murder of his supporters, and for the installation of an interim national government. The cleric, who late Saturday issued a 48-hour ultimatum to the government to accept his demands, said he would not be responsible for any repercussions if they were not met.

Ten workers of Qadri’s Pakistan Awami Tehreek movement were killed in clashes with police at his headquarters in Lahore on June 17. A judicial commission was formed to investigate.