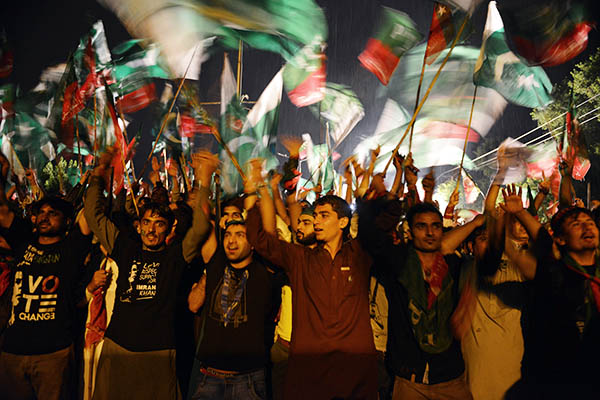 PTI chief informed protesters in Islamabad that he would not leave the capital until Prime Minister Nawaz Sharif resigns.

Cricketer-turned-politician Imran Khan said Saturday he would continue to lead protests in Islamabad along with thousands of his supporters until Prime Minister Nawaz Sharif steps down and an interim setup holds new polls.

Addressing a rally after leading protesters from Lahore, Khan said he would stage a sit-in on Saturday afternoon that would continue until Sharif leaves office. “The time has arrived when the nation should decide. I will stay here until the prime minister resigns. We don’t accept a prime minister who has been appointed after rigged elections,” Khan told supporters around 3:00 a.m. after arriving in the capital. Shortly after this announcement, Khan told his supporters that they should return to the venue at 3 p.m. to commence their sit-in.

The demonstration is the culmination of the “long march” that set off Thursday from Lahore to try to topple the government. The marchers took more than 36 hours to reach the capital as convoys made stopovers in various cities along the road, where they were warmly welcomed.

“We went to the Election Commission and the Supreme Court against the rigging in the elections. When we could not get justice, then we decided that there is no other way but to come on roads to get justice,” he said.

Populist cleric Tahir-ul-Qadri also led thousands of his own followers alongside Khan. Both Khan and Qadri plan to rally in Islamabad until their demands for Sharif’s resignation and for electoral reforms are met.

Police and witnesses said on Friday that activists from Khan’s Pakistan Tehreek-e-Insaf (PTI) party clashed with supporters of Sharif’s Pakistan Muslim League (Nawaz) in Gujranwala. Khan claimed shots were fired on his march, telling ARY television news: “They threw stones at us … They fired bullets at us.” However, police said there were no shots and an AFP photographer at the scene also heard no gunfire.

“Workers of PTI and PMLN clashed in Gujranwala and threw stones at each other,” according to a police spokeswoman. “There was no firing incident,” she added. The AFP photographer said a group of up to 40 youths who were following the convoy and shouting slogans clashed with workers from Khan’s party before being dispersed by police.

Supporters of PTI, which came third in last year’s elections, lined up to welcome the convoy in towns along the Grand Trunk Road that links Lahore and Islamabad. Exact numbers for the march have not been confirmed—although government spokesmen have claimed approximately 35,000 protesters have joined Khan in Islamabad—and organizers said they expected a clearer picture once all of those who joined the rally congregate in Islamabad. But Khan hailed it as a success and claimed one million took part. “The people have decided. I said one million people will come to Islamabad, and they have come out.”

Both Khan and Qadri had originally planned for their marches to converge on Islamabad on Thursday, Pakistan’s independence day, but they made slow progress. By Friday evening Khan’s march was slowed to a snail’s pace by PTI well-wishers.

Security in Islamabad was ramped up in recent days, with more than 20,000 police and security forces on the streets. The government has agreed to allow the two groups to hold rallies but many of the city’s streets are blocked off with shipping containers to protect sensitive areas.

Around 5,000-7,000 PTI supporters, mostly from northwestern Khyber-Pakhtunkhwa province, gathered in the capital in preparation for the arrival of the march. There was a festive mood, with many dancing, singing and waving party flags, despite a torrential monsoon downpour.

Government officials have accused march organizers of trying to derail democracy and Sharif said the marches were a distraction from more pressing issues. Marvi Memon, a PMLN parliamentarian and spokeswoman, said Khan had ignored constitutional routes to address his grievances, including an offer by Sharif to set up a judicial commission to investigate rigging allegations.

“All his efforts are undemocratic and unconstitutional and an effort to derail democracy,” she said.