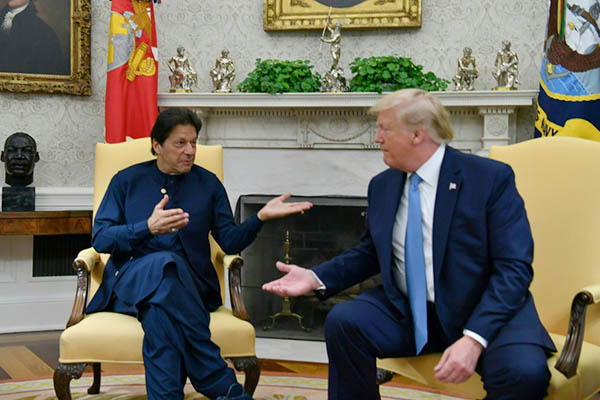 Prime Minister Imran Khan on Thursday urged U.S. President Donald Trump to continue his efforts to facilitate a peaceful solution to the Jammu and Kashmir dispute between Pakistan and India.

During a phone conversation, the two leaders discussed bilateral and regional issues, according to a press release issued by the Prime Minister’s Office. Apprising his U.S. counterpart of the ongoing situation in India-held Kashmir, P.M. Khan stressed that over 8 million residents of the disputed territory had been under siege at the hands of New Delhi’s armed forces for over 100 days now. He also appreciated Trump’s continued engagement and his offer from earlier this year to mediate the issue between Islamabad and New Delhi.

The conversation also discussed the prevailing conditions in neighboring Afghanistan, with Trump thanking Khan for Pakistan’s efforts in helping secure the release of two Western hostages from the Taliban. Khan said Pakistan was happy that the pair was safe and free and reiterated the country’s commitment to advancing an Afghan-led peace and reconciliation process for a peaceful and stable region. Both leaders, according to the press release, agreed to continue to work together for the promotion of this shared objective.

Trump and Khan also recalled their one-on-one conversations in Washington and New York earlier this year, with both leaders agreeing to expand bilateral collaboration between their two nations, including at relevant multilateral fora. They also agreed to remain in close contact going forward.

The Taliban earlier this week released two hostages—Kevin King from the United States and Timothy Weeks from Australia—in a prisoner swap with the Afghan government that saw Kabul releasing three insurgents, including prominent militant Anas Haqqani.