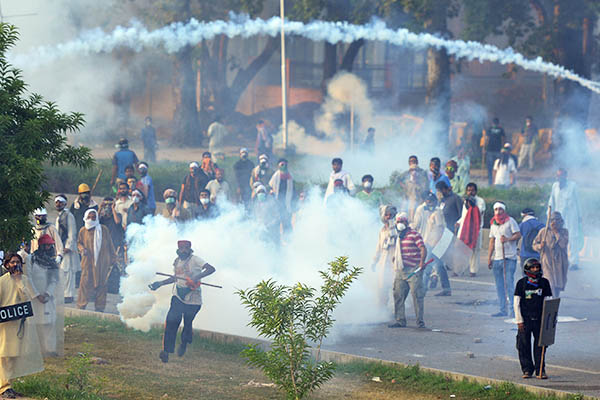 Cricketer-turned-politician Imran Khan vowed Sunday to protest “until the last breath” as ongoing clashes between his supporters and police outside the Prime Minister’s House left three dead and hundreds injured.

The violence began Saturday night after thousands of supporters of Khan and firebrand cleric Tahir-ul-Qadri tried to storm Prime Minister Nawaz Sharif’s official residence using cranes to remove barricades. By Sunday afternoon clashes were continuing between police in riot gear and a few hundred protesters. Many protesters had come armed with batons and slingshots.

Shipping containers were set ablaze, several vehicles stood torched, and hundreds of tear gas canisters lay strewn on the ground on Islamabad’s normally pristine Constitution Avenue following more than 15 hours of battle. Both police and protesters also targeted the media covering the situation, with local television channels showing police beating up journalists and protesters attacking the Islamabad offices of private TV channels. Multiple federal ministers condemned the attacks on media, and assured reporters that action would be taken against those found guilty of targeting them.

The opposition groups marched to the capital on Aug. 15 demanding the resignation of Sharif, triggering a crisis that has raised the specter of military intervention. They claim the 2013 elections that swept Sharif to power were rigged, though local and foreign observers rated the polls as relatively fair credible.

Speaking from on top a container, Khan said: “Now I ask all Pakistanis: rise up against this government. This is not a constitutional government—they are killers. We will continue until our last breath. I urge all Pakistanis to come out.” He added that he would file murder charges against Sharif and the interior minister, Chaudhry Nisar Ali Khan, for the violence.

Earlier, information minister Pervaiz Rashid had said the government remained open to restarting negotiations. “They wanted their demands to be met at gunpoint but still, our doors are open for talks.”

A Qadri follower outside Parliament who identified himself as Aziz complained: “This is democracy, this is democracy in Pakistan. It is more dangerous than military dictatorship, they don’t allow people to make peaceful protests.”

The Pakistan Institute of Medical Sciences (PIMS) reported three deaths—two men from injuries sustained in the fighting and another who died of a heart attack. At least 481 injured, including at least 118 women and 10 children, were rushed to the city’s two major hospitals, PIMS and Poly Clinic, according to officials. At least 92 police were among the wounded.

The crisis took on a new dimension on Thursday after it was announced the country’s Army chief Gen. Raheel Sharif would mediate. Observers believe that if Sharif survives the crisis it will be at the cost of significant concessions to the Army—including allowing ex-Army chief Pervez Musharraf, currently on trial for treason, to leave the country.

But political analyst Mosharraf Zaidi said the protests had become difficult to contain and the opposition could be trying to get the military more directly involved. “The single objective is to force Sharif to resign and possibly force the military to intervene,” he said.

Zaidi also dismissed claims by the protest groups that they had not initiated the violence. “You cannot build up emotions nationwide, but particularly [outside Parliament], for 17 days—you cannot say ‘I want my tigers in the front and my women in the back’—you cannot be in attack formation and then claim you had no role in fomenting this violence,” he said.

Javed Hashmi, a senior member of Khan’s Pakistan Tehreek-e-Insaf party broke ranks Sunday, saying the protest had gone too far. “How can I side with you when you march on the Parliament? There is hardly any distance left between us and martial law,” he said, addressing a press conference. He also claimed Khan had agreed to remain in front of Parliament until he received a message from an unidentified source. “[After receiving the message] Khan said he had a ‘compulsion’ to march on P.M. House and told the party’s core committee that anyone who disagreed with him could leave now,” Hashmi added.

The protest leaders have drawn thousands to the streets of Islamabad, but their call has not mobilized mass support beyond their core followers. But many of the protesters are now openly calling for the military, which has ruled Pakistan for half its existence, to return to power.

“Last night, the police used tear gas and rubber bullet against us. Now we are waiting for the help of the Army. We are hopeful. God willing the Army will save us, they will do something for us,” said a female protester in her twenties.

Sharif, whose previous term as prime minister ended in a bloodless coup by ex-ruler Musharraf, has vowed to stay on.