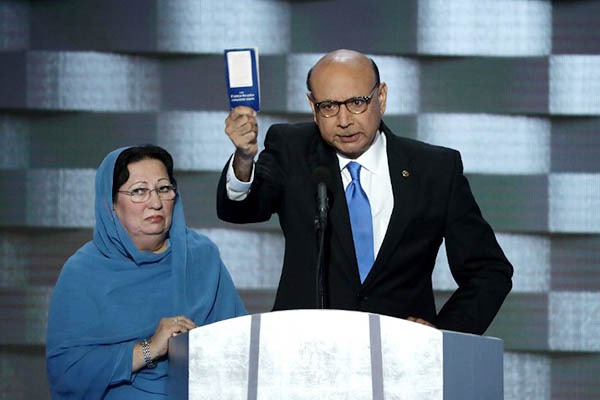 The Pakistani-American father of a soldier killed in Iraq who slammed Donald Trump during last year’s election campaign will publish a children’s book about the Constitution in November, his publishers announced.

Harvard-educated lawyer Khizr Khan shot to fame in the United States for delivering a damning indictment of Trump at the Democratic National Convention, accusing him of sacrificing nothing for the country and stressing the importance of an inclusive America. Trump hit back hard, saying Khan had “viciously attacked” him and refused to apologize for suggesting that Khan’s wife Ghazala had stood silently at his side because she was not allowed to speak, triggering uproar within his party.

This Is Our Constitution will be a non-fiction hardcover suitable for children aged 10 and over and be released simultaneously with Khan’s adult memoir, An American Family, on Nov. 14, Random House Children’s Books said Thursday.

Khan grew up in Pakistan, before immigrating with his wife to the United States in 1980. Their son, Captain Humayun Khan, was killed in Iraq in 2004 and posthumously awarded a Purple Heart and a Bronze Star. He delivered one of the most memorable speeches of the Democratic convention, in which he honored his son’s sacrifice, accused Trump of smearing the character of Muslims and questioned whether the Republican candidate had even read the Constitution.

His publishers said the book would introduce young readers to the history and contents of the Constitution and Bill of Rights, and why they are important. “This book is my humble effort to pay tribute to our future leaders, the true custodians of our Constitution, and to all of the human dignities enshrined in our Bill of Rights, as the making of our republic continues,” Khan said.