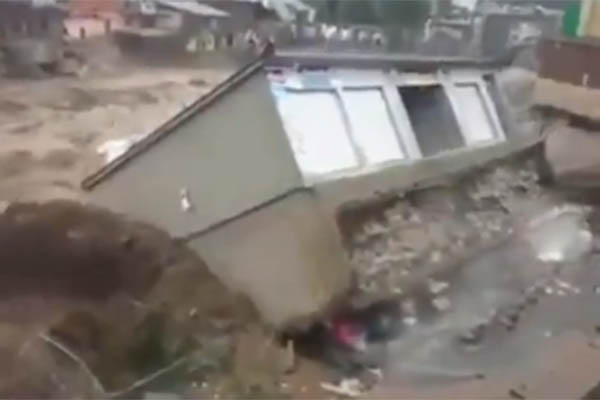 The Khyber Pakhtunkhwa government on Friday declared an emergency in Swat as flooding in the district caused several buildings to collapse and stranded local residents without aid.

In a notification, authorities said they were declaring an emergency in Swat till Aug. 30 on the recommendations of the Provincial Disaster Management Authority (PDMA) to facilitate relief activities. According to local media, several families in Swat, Dir and Chitral have been stranded by excessive flows of the Swat River, with the government struggling to evacuate them to safety.

According to a notification issued by the Provincial Emergency Operations Center, water flow in the Swat River has reached high to very high flood levels, posing a threat to communities living nearby. It directed the deputy commissioners of Swat, Lower Dir, Malakand, Mohmand, Charsadda, Mardan, Nowshera and Peshawar to “immediately identify vulnerable points and communities at risk to devise mitigation and safety measures,” adding that locals living on the banks of the rivers should be informed of the impending threat so they could evacuate to safety.

The PDMA has also instructed authorities to evacuate cattle from areas at risk of flooding, and bar vehicular movement. Video footage from citizen journalists shows several hotels and restaurants—constructed on the riverbank or even directly above it—completely submerged or destroyed by the deluge.

In a statement, the government said Chief Minister Mahmood Khan had directed the PDMA to expedite relief activities in the region and ensure timely provision of groceries, cooked food and other essential commodities to the victims of the devastation. The district administration, meanwhile, has said that road linkages to the region have been severed following damage to bridges connecting Matta, Sukhra, and Lalko to Swat city. In a statement, the Frontier Works Organization said the Karakoram Highway had been swept away by floods at Zaidkarh Dassua and was blocked at several points due to landslides.

Similarly, in Nowshera, public and private schools have been closed for two days. According to the district administration, flow of the River Kabul near Nowshera has already hit 155,000 cusecs and could rise to 400,000 cusec—far higher than the 2010 floods—posing a risk to the local population.

Also on Friday, PTI chief Imran Khan and KP Chief Minister Mahmood Khan reached Dera Ismail Khan and Tank to meet victims of this year’s flood and offer them support. Addressing media at a relief camp in D.I. Khan, the ousted prime minister said damages caused by floods were being assessed by the government. “The rains this year caused damage by ten-folds as compared to floods in 2010,” he claimed and reiterated his calls for the construction of small and large dams across the country to curb future flooding events.