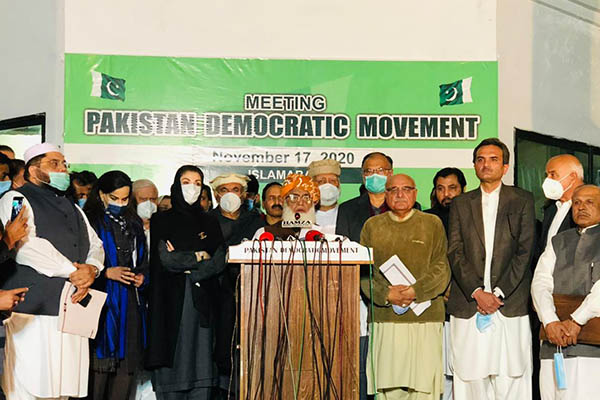 In statement, Peshawar’s deputy commissioner says COVID-19 situation does not permit the organization of any large public gatherings

The Khyber-Pakhtunkhwa government on Friday rejected a request by the united opposition’s Pakistan Democratic Movement (PDM) to stage a rally in the provincial capital on Sunday (Nov. 22), citing the worrying rise in COVID-19 infections for its decision.

In his response to the PDM’s request for a no-objection certificate to hold a rally at Peshawar’s Dalazak Road, Peshawar Deputy Commissioner Muhammad Ali Asghar said the matter was deliberated upon by both the district administration and capital city police, adding field assessments had been conducted and meetings held with the organizers of the rally.

Citing a Nov. 2 notification of the Khyber-Pakhtunkhwa government that had advised restricting ceremonies and public gatherings, he refused to grant permission for the event. “The COVID-19 positivity rate for district Peshawar has presently exceeded 13 percent, which is alarmingly high, and any large public gathering is likely to further increase the spread of life-threatening virus,” he said.

“Keeping in view the above, and after considering all aspects, and to safeguard human lives due to potential spread of COVID-19 virus, the undersigned [Peshawar deputy commissioner] regrets to inform you that permission for the said event has not been granted,” he added.

The PDM has repeatedly vowed to resist any efforts to prevent the rally from proceeding. The latest ‘power show’ of the united opposition, it is likely to be addressed by Jamiat Ulema-e-Islam (Fazl)’s Maulana Fazlur Rehman; Pakistan Muslim League (Nawaz)’s Maryam Nawaz; Pakistan Peoples Party’s Bilawal Bhutto-Zardari, and others. Observers say the event is expected to draw thousands, which runs contrary to the National Command and Operation Center (NCOC)’s restricting all public events to attendance of 300 or less people to curb the spread of COVID-19.

Senior leaders of the PDM, including Rehman, have alleged that the government is “hiding behind coronavirus,” and slammed it for allowing its own lawmakers to stage mass rallies while denying the opposition their right to assembly.

Information Minister Shibli Faraz on Thursday warned that if any COVID infections or deaths were linked to their rallies, the opposition would be held responsible for the loss of precious lives.