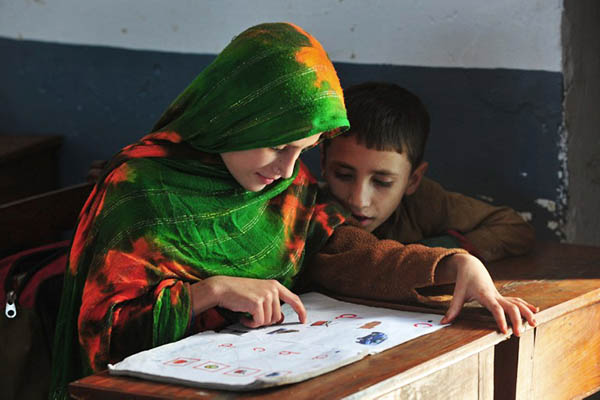 Coalition partner Jamaat-e-Islami wants to remove pictures of unveiled girls, and any depictions of the Christian faith.

The Pakistan Tehreek-e-Insaf-led government of Khyber-Pakhtunkhwa province has agreed to amend primary school-level textbooks after coalition partner Jamaat-e-Islami raised concerns over “objectionable” pictures, according to officials.

“The Jamaat-e-Islami raised serious concerns about some pictures that were printed in the textbooks of primary schools and the provincial government has decided to remove them,” said a senior official in the Khyber-Pakhtunkhwa Elementary and Secondary Education Department on condition of anonymity, as he is not authorized to speak to media.

“The provincial government has directed the education department to take steps to address all objections raised by the Jamaat-e-Islami so we expect orders to be issued shortly in this regard,” he added. The senior official said the government primarily wanted to remove “pictures of unveiled Christian girls” and other pictures depicting the Christian faith.

A PTI leader in Khyber-Pakhtunkhwa confirmed the amendments had been approved after the Jamaat-e-Islami met Chief Minister Pervez Khattak and voiced their concerns over the “objectionable” pictures. Speaking on condition of anonymity, he said the JI leaders had raised objections over pictures of girls wearing skirts, images of unveiled girls, a cross emblem appearing on an ambulance instead of a crescent and some images of Christmas cakes.

“The Jamaat-e-Islami also raised objections on an essay printed in the textbooks that stated Bangladesh achieved independence from Pakistan,” he said. “JI leaders said this implied Pakistan had occupied Bangladesh, which was a wrong perception,” he said, adding, “They advised us to change the text to ‘Bangladesh and Pakistan became separate countries in 1971’.”

The JI also took issue with some textbooks stating “Good Morning” instead of the traditional Muslim greeting of “Assalam-o-Alaikum,” according to the PTI official.

A JI spokesman said his party had conveyed its reservations to the provincial leadership, adding that the “objectionable” material had been removed after a meeting with elementary and secondary education minister Atif Khan earlier this week.

Earlier this year, the JI had threatened to quit the Khyber-Pakhtunkhwa government over the addition of “un-Islamic” material in textbooks.

Nice work according to our Islamic constitution. No harm for others as its our right to educate our kids in accordance to our way of life and Ideology.

By doing this, you’re condoning the exclusion of all minorities from Pakistani nation. And that’s just sad. I don’t feel angry about this as a minority. I just feel sad and pitty the minds who think that having even a mention of other religions and cultures are currently exists in Pakistan will somehow polute the education of the next generation. Sad… That’s just sad…

We only left with the bastards in this country people with love harmony and tolarence no longer exist here.

Nice work. Being a Muslim I advocate rights of minorities as Islam do. But Pakistan being an Islamic state has the right to amend its education material according to the teachings of Islam. And I think removal any objectionable material from books doesn’t effect rights of minorities in Pakistan.