Home Lightbox Killing in the Name of Honor

Killing in the Name of Honor 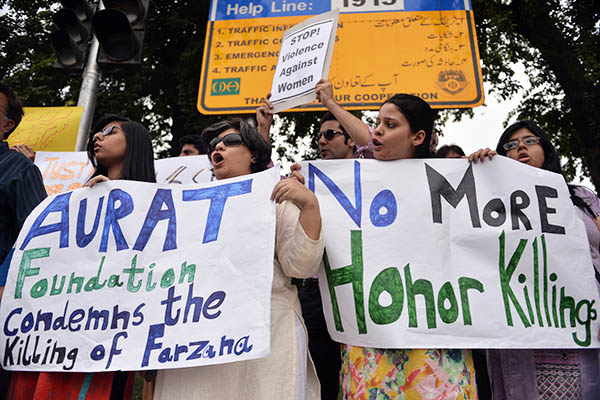 Women in Pakistan have come a long way in their fight for autonomy over their lives.

From the medieval era through the relatively recent past, women have been burnt to death on suspicion of being a witch. In the modern era, they continue to be brutally murdered in many parts of the world—only this time their “crime” is “dishonoring” their families and corrupting society. This evil practice of killing a woman who asserts her right to take decisions on her choice to marry, divorce or befriend a man is not limited to feudal societies and cases have been found in almost every region of the globe. The killer is usually the brother or another male relative of the victim, but distressingly mothers have also been known to kill their daughters to vindicate so-called family honor.

This summer, several gruesome murders of young girls slaughtered by their families were reported on an almost daily basis.

A brother, to avenge the “dishonor” his 20-year-old sister had brought to the family by talking to a boy on the phone, slaughtered her in Karachi in April. He used a kitchen knife to slit her throat and sat on her till she bled to death. People from the neighborhood looked on—some with approval. A few aghast onlookers finally informed police of the crime.

Another chilling murder of a 16-year-old was reported in May. She was strangled and set on fire on the orders of a jirga in Abbottabad for helping her friend elope with her lover. In Pakistan, such jirgas are informal forums that pass edicts and enforce punishments against those accused of moral and other offenses. Exclusively comprised of men, their judgments are considered illegal. Women and non-Muslims are never included. While a few non-Muslim jirgas also exist, women are again excluded.

In Lahore, the capital of the most affluent part of Pakistan and known for its liberal values, an 18-year-old girl was burnt to death by her mother for marrying a man of her choice in June. The family lured her back home after the marriage on the promise of holding a proper marriage ceremony as tradition demands. When she came back, she was beaten and eventually killed. That same month in Okara, 21 members of a family took an oath on the holy Quran to kill their female relative for having married outside of the clan and thus “dishonoring” them. They had the audacity to inform the authorities of their plans.

While such cases have been swept away or simply ignored in the past, the government could not ignore this murderous spree. Taking serious notice on the reports of “honor” crimes, authorities gave assurances of conducting independent investigations. This is an improvement, but it is not enough. By the time these cases reach court, intimidated witnesses refuse to come forward. Moreover, as soon as a young girl is killed, influential men use the media to launch character assassination campaigns.

A number of civil society fact-finding missions have noted that there is a clear division of opinion between the men and women of the communities where such crimes are committed. The women are disturbed by violence being committed in the name of “honor,” but are seldom in a position to come forward and give evidence—though many do take the courageous step to speak to the media. The men, meanwhile, justify the murders on one pretext or another.

Killings in the name of “honor” have been committed with impunity throughout Pakistan’s history. Till very recently, courts usually let off offenders with a light sentence. The courts saw a “wayward” woman’s murder as provocative and hence the sentence was reduced. There are even cases where courts sentenced the accused briefly, as an afterthought—till the end of hearings for the day. The law was further complicated in the early ‘90s, when Pakistan’s qisas and diyat amendments allowed murder to be forgiven by the family of the victim. In the case of “honor killings,” families murdered and then forgave themselves.

After a rigorous campaign by women’s groups this law was amended in 2012, prohibiting forgiveness for “honor killings.” However, prosecutors now had to prove that the murder was indeed an “honor killing.” With few witnesses willing to come forward, this was next to impossible and many murderers were allowed to go free. Even when a victim managed to survive, her family often emotionally blackmailed her to disassociate from the prosecution.

In Pakistan, the law does not prohibit any woman from marrying a man of her choice, but the country’s courts have traditionally adjudicated each case according to the moral value of the presiding judge. Love marriages have been described as “runaway marriages” and the woman humiliated by dubbing her a “wayward” person who polluted the social and cultural norms of society. In 1995, a controversial ruling of the Lahore High Court held that even adult women required the permission of their legal guardians (walis) to contract a valid marriage. After a few landmark cases—where women’s organizations actively pursued convictions—Pakistan’s Supreme Court in 2003 established that an adult woman did not require her guardian’s consent to marry and an admission by the couple is sufficient proof of marriage.

Similarly, public opinion and the attitude of political parties softened after a few outrageously gruesome murders on the pretext of “honor” were widely reported by the local and international press. An open debate in the media compelled even some hardliners to change their views. Most importantly, in every home young women argued for more autonomy over their lives. It has not eliminated the evil practice of murdering women or associating honor with women’s sexuality but it has given courage to more women to make their own choices. Public opinion has also undergone a substantial change. Unlike the past, so-called honor killings are no longer justified in Parliament and courts can no longer humiliate women for making their own choices. All these positive changes have helped the passage of this week’s amendments to the anti-honor killing laws—which now mandate life imprisonment in honor killing cases even if the victim’s relatives forgive the murderer. There is still much to be done, however.

Love affairs in Pakistan are denounced on the premise that they are destructive to our cultural norms. Ironically, the most popular folklores in the same country focus on passionate love affairs in which the lovers are eulogized and those who vilify them looked down upon as the villains.

The writer is a lawyer and human rights activist.

BEST WAY TO REMIDE THIS HONOR KILLING EPTIC **IS TO KILL BACK !