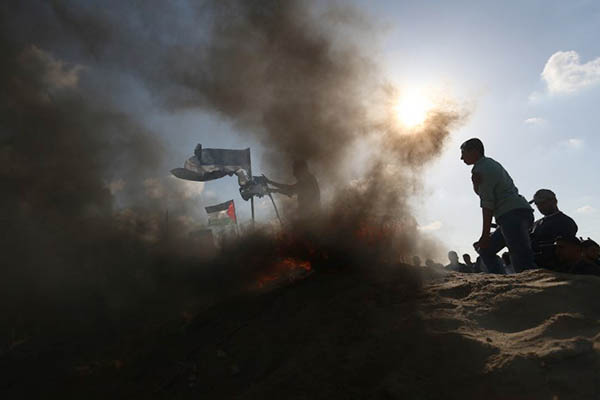 The 15-year-old was shot dead by Israeli gunfire, prompting calls for ‘full investigation’ by world bodies

The death of a Palestinian teenager during protests along Gaza’s border with Israel sparked condemnation and international calls for restraint on Saturday.

Rescue services and relatives said Mohammed Ayoub, aged 15, was killed by Israeli gunfire on Friday. The Israeli army said on Saturday it was opening an investigation into the death of the young Palestinian, who was killed during demonstrations that have brought thousands of Palestinians to the border for four consecutive Fridays.

A spokesperson for the European Union on Saturday called for a “full investigation” into the circumstances of the death. “As we once again mourn the loss of lives, the E.U. calls on the Israel Defense Forces to refrain from using lethal force against unarmed protesters,” a statement said. “As stated repeatedly, the priority now must be to avoid any further escalation of violence and loss of life.”

On Friday night, U.N. special coordinator for the Middle East peace process Nikolay Mladenov wrote on Twitter: “It is OUTRAGEOUS to shoot at children… #Children must be protected from #violence, not exposed to it.” The teenager’s father Ibrahim Ayoub told AFP his son “was standing far from the soldiers and not armed.”

“Why are our children killed and Israeli children living a quiet life?”

Three other Palestinians were killed on Friday, bringing to 38 the death toll from Israeli gunfire since the start of “March of Return” protests on March 30.

High-ranking Palestinian official Saeb Erekat called on the International Criminal Court to open a “serious judicial inquiry into the crimes committed against the Palestinian people.”

U.S. envoy for the Middle East Jason Greenblatt called for moderation. “As we mourn the tragic loss of a young life, we must all commit ourselves to avoid further suffering by responses to this death,” he said.

Israeli forces have responded to demonstrations along its border by firing live ammunition, injuring hundreds in addition to the deaths. But Israeli Defense Minister Avigdor Lieberman on Saturday reiterated that he held leaders of Islamist movement Hamas, which rules Gaza, responsible for the violence and the death of the Palestinian teenager.

“Those cowardly leaders who are hiding behind women and children and send them forward as a human shield, so that they can continue to dig tunnels and carry out terrorist actions against the state of Israel,” he wrote on Twitter. “I will again tell the habitants of Gaza… Do not approach the fence.”

Tens of thousands of Palestinians in the Gaza Strip, wedged between Israel, Egypt and the Mediterranean, have gathered at the border since March 30 calling for Palestinian refugees to be allowed to return to their former lands now inside Israel.