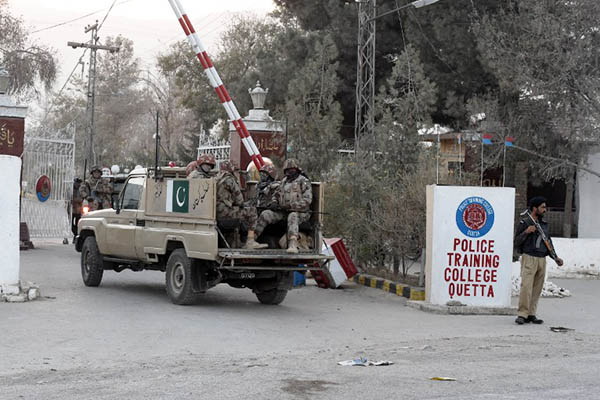 Quetta failed to protect its Police Training College despite two earlier attempts to target it.

On Oct. 24, three suicide-bombers carrying Kalashnikovs entered Quetta’s Police Training College and killed 60 trainees and injured 120 others. They entered the college easily after killing the watchtower guard, as there was no security backup. The Frontier Constabulary and SSG commandos arrived an hour after the killers had done their job. By then two of the militants had blown themselves up. The third was killed by the FC. The FC has accused an offshoot of the Lashkar-e-Jhangvi for the strike; the Islamic State militant group, through its affiliated Amaq news agency, has claimed it.

The training college for 700 trainees is on Sariab Road, the killing fields of the city’s luckless Hazara Shias. The college had been attacked earlier in 2006 and 2008—“with attackers firing rockets into the college playground”—but no one thought of the poor police recruits living as sitting ducks and no additional security was provided. The kneejerk reaction from the Quetta security department is that the attack has come from Afghanistan, which means the Afghan National Directorate of Security (NDS) did it. And if you join the dots of the Pakistani mind, then India has staged this horrible massacre—a theory also hinted at by Interior Minister Chaudhry Nisar while addressing a passing out parade of police officers in Islamabad.

Despite these conspiracy theories, the stamp of our own homegrown terrorists is undeniably there, some of who are admittedly hiding in Afghanistan. In 2009 they attacked the Police Training School at Manawan near the Wahga border in Lahore, killing eight at the entrance of the school with hand grenades and automatic fire. In 2010, the Crime Investigation Department (CID) in Karachi was blown up. Brigade 313, run by Army defector Ilyas Kashmiri, perpetrated that attack. The militant organization included several Al Qaeda-linked Pakistani terror groups—its flag mentioned Harkat-ul-Jihad-al-Islami, Lashkar-e-Jhangvi, Jandullah, and the Movement of the Taliban (TTP) on its four corners.

Sunni Quetta can’t defend the Hazaras because they are Shia, but at least it should be able to protect its security forces. The Quetta police college should have been better guarded after the earlier two attacks in 2006 and 2008. Leaving it defenseless was inviting disaster.

“Sunni Quetta can’t defend the Hazaras because they are Shia, but at least it should be able to protect its security forces.” Not sure why the author added this line. This carnage just proves that terrorists can strike regardless of ethnicity, and the Sunni victims are as defenseless as Shias. The government does and should provide equal protection regardless of sect.

Wht protection. You saying Shia are being butchered over here in Pak.wahbabis influence has destroyed Pak.hkw many Shia you ki.we would be resilient.o ur quad I Azam was Shia he would be ashamed of Pak now.