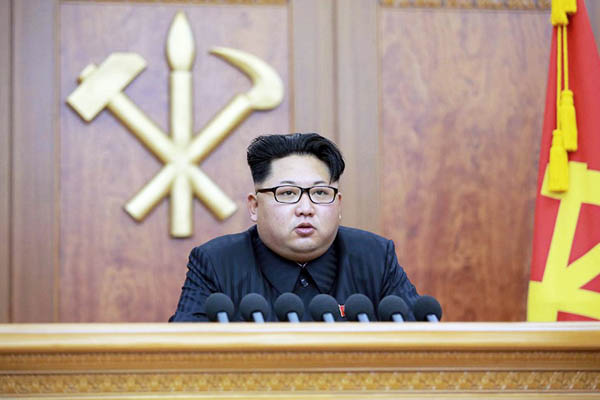 North Korean dictator is asserting his authority by dealing aggressively with both internal dissent and international community.

With a surprise nuclear test two days before his birthday, North Korea’s young leader Kim Jong-Un has once again asserted his personal control over the hermit state he inherited from his late father four years ago.

When he came to power after Kim Jong-Il’s death in December 2011, the younger Kim was considered untested, vulnerable and likely to be manipulated by senior figures. But he has proved his mettle in dealing harshly—sometimes brutally—with any sign of internal dissent, even at the highest levels, while maintaining an aggressively provocative stance with the international community.

He has shown himself willing to alienate the North’s sole major ally China with his unstinting efforts to advance the country’s nuclear and missile programs that culminated in Wednesday’s announcement of a “successful” hydrogen bomb test.

The announcement came just two days before his 33rd birthday on Jan. 8 and ahead of a rare ruling party congress scheduled to take place in May—the first such gathering for 35 years.

Birthdays and other key anniversaries have often been used by North Korea as an excuse to demonstrate its military prowess and glorify its leaders.

With the H-bomb claim, Kim can now boast of a “‘great achievement’ that even [founding leader] Kim Il-Sung or Kim Jong-Il could not realize,” said Toshimitsu Shigemura, a professor at Tokyo’s Waseda University and an expert on North Korea.

Kim Il-Sung is still widely revered in North Korea, something his grandson has sought to play on by appearing to mimic his hairstyle, dress, mannerisms and public speaking style. The younger Kim has also continued the time-tested ways of his forebears in selectively stoking tensions with rival South Korea, occasionally extending an olive branch only to snatch it away again. But he has yet to make an overseas visit as leader, even to traditional ally and economic benefactor China, where his father journeyed repeatedly.

After his father’s death, North Korea was quick to burnish the young Kim’s credentials, hailing him as head of the powerful military as well as chief of a key ruling party organ. That left little doubt that he was on track to take full control of the secretive nation, but he was expected to initially rely on a coterie of powerful aides, including his uncle Jang Song-Thaek.

But that expected tutelage was short-lived as Kim started to remove any potential challenges to his authority. In December 2013, state news agency KCNA announced Jang’s execution, condemning him as a “traitor” to the nation and deriding him as “despicable human scum… worse than a dog.”

Other purges of high-ranking officials followed, leading some analysts to question whether Kim was truly confident in his own power base.

His refusal to be cowed by international criticism or pressure has been displayed on numerous occasions, including a long-range rocket test late 2012 and a third nuclear test in February the next year.

Kim emerged as North Korea’s future leader after his father suffered a stroke in August 2008 and revved up plans for the nation’s second dynastic succession, but his early life was largely shrouded in mystery.

Kim Jong-Un was born to his father’s third wife, Japan-born ethnic-Korean dancer Ko Yong-Hi, who is believed to have died of breast cancer in 2004. He studied in Switzerland where reports say he enjoyed basketball and drawing cartoons. School staff and friends remembered a shy boy who liked skiing and Hollywood tough guy Jean-Claude Van Damme.