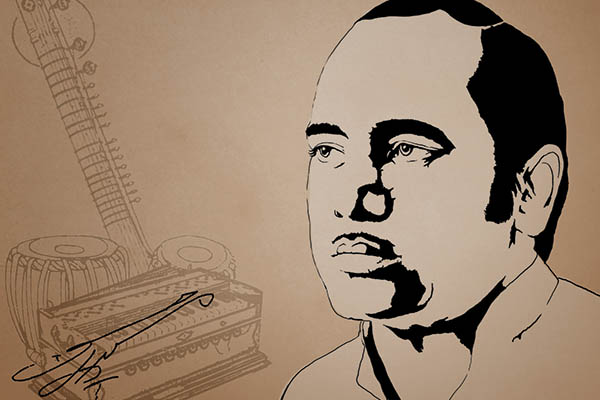 To trace the history of how Pakistan thought and felt through the decades, one needs to rediscover Mehdi Hassan

In a Mark Twain moment, the reports last month of Mehdi Hassan’s death were greatly exaggerated.

The ailing singer who nurtured the ghazal to its current prominence has been suffering ill health for over a decade. Hospitals have become routine, and paralysis has taken its toll. In the process, the man who never hit a false note has lost his voice.

In less debilitating days, Hassan sang of a generation’s unrequited love with sweet regret: of separations, heartache, and a glass that was always half empty. Venerated from the ’60s through the 80s as the ghazal king, Hassan was also the king of pain—a pain that appealed perfectly to Pakistan, a country which likes to wallow in the misery and mire of failed relationships.

Hassan’s iconic rendition of the Ahmed Faraz lament “Ranjish hi Sahi, Dil hi Dukhane ke Liye” established him as the voice of the perpetually rejected lover. Men all over Pakistan identified with his melancholy, with the endless loss of romance. In reality, Hassan managed a successful marriage, the second time around—and a brood of 14 children.

A product of his times, Hassan has been more of a radio star than a video one. It’s difficult to imagine his genteel stage presence adapting readily to a more visual age. Hassan wasn’t just deified in Pakistan. Across the Wagah, Indians were listening to his albums, religiously. Bollywood singing legend Lata Mangeshkar is famously supposed to have said that Hassan sang like a god. By the time the two of them got together for a duet, for 2010’s “Sarhadein,” neither was, unfortunately, in top form.

Even at his finest, Hassan’s was not the most dynamic voice. But it was mournful, silky smooth, nuanced, quietly seductive. It was the perfect foil to Noor Jahan’s, she of the dramatic vocals. His husky, tuneful reticence played as counterpoint to her glorious high passion on their duets, which included “Aap ko Bhool Jayen Hum” and “Tu Jahan Kahin bhi Jaye.” Their greatest numbers though have always been sung apart.

According to composer Arshad Mahmud, a director at Karachi’s National Academy of Performing Arts, Hassan contributed to Pakistani music by experimenting with and popularizing the ghazal, a genre traditionally if not wholly reserved for female singers such as Begum Akhtar and Mukhtar Begum. “He could make even the most intricate pieces sound effortless,” says Mahmud. Faiz Ahmed Faiz’s “Gulon May Rang Bhare” and Ahmed Faraz’s “Ab Ke Hum Bichray” are among the works that benefited from Hassan’s experimentations. Both ghazals found mainstream success through incorporation into Lollywood soundtracks. Mahmud says Hassan’s feigned vocal simplicity made him far more accessible to lay listeners than some of his more baroque successors, such as Ghulam Ali.

As the ideals of Pakistani cinema shifted, moving toward more attainable love in the mid-70s, Hassan’s music, too, became more varied. He collaborated with music producers like Robin Ghosh, who was married to actress Shabnam and heavily influenced by Bollywood composers like S. D. Burman. Ghosh’s music was more visceral and earthy than anything Hassan had done before. And it showed in surprisingly sensual hit numbers like “Pyar Bharey do Sharmilay Nain,” “Teray Bheegay Badan ki Khushboo,” and “Thehra hae Sama.” This was a new, happier Mehdi Hassan—one that purists prefer to ignore in great injustice to the singer and the works. These songs are little nuggets of pure romance, passionate traipses through soulful terrain.

The quintessential Mehdi Hassan, Shahenshah-e-Ghazal, continues to be a man of poetry, who enunciated to our delight the works of Ghalib, Faiz, Faraz, Hafeez Hoshiarpuri. But beyond the literary and the Lollywood, there is Hassan the revolutionary. Habib Jalib’s “Raqs Zanjeer Pehan Kar Bhi Kiya Jaata Hae” was written it is said after actress Neelo refused the Nawab of Kalabagh’s orders to perform for the Shah of Iran. Hassan’s 1969 version of this Jalib piece remains the most indelible one.

For a generation reared on Bollywood item numbers and Pakistani pop, Mehdi Hassan is an anachronism, a singer’s singer from one’s grandfather’s age. Do poetry and romance still have a place in a world of fast love? With its contemporizing mash-ups of genres and talent, Coke Studio has proven that they do. Mehdi Hassan needs to be rediscovered, not just for the sake of nostalgia or because he has fallen ill again. Hassan’s catalogue is a chronicle of how Pakistan thought and felt through the decades. To rediscover Hassan is to trace one’s finger across a country’s history of the heart and all its scarred beauty.

Haroon is a journalist based in London